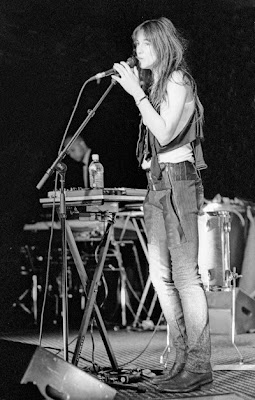 Charlotte Gainsbourg
(with AM and Jogger)
Monday, April 12
Element Nightclub

Seeds of discontent were sewn long before a couple hundred folk lined up in front of Element Nightclub for their chance to catch a glimpse of Charlotte Gainsbourg, famed actress and, more recently, chanteuse, singing songs from her most recent, highly praised album IRM. The show was originally scheduled to take place at the Alix Goolden Hall, one of Victoria’s most beautiful and acoustically beatific musical venues. Instead, concert-goers were greeted by the Strathcona Hotel’s burly bouncers before descending into Element’s blue-lit belly.

Those who were first in line hurried to the dance floor which, on that night, would not light up; candle lit tables stood in place of sweaty, frantic bodies. I would venture to guess that most of Element’s patrons that night hadn’t darkened the doorway of this, or any other nightclub, in the past decade. Spectacles surveyed the club’s oversized speakers fearfully. People talked philosophy and books (I saw more than one copy of Camus by candle-light that night) while slowly sipping their wine under the watchful eye of disappointed waitresses.

AM, a three piece band out of L.A., were the first to take the stage. The most striking thing about this band was the drummer’s remarkable resemblance to painter and cultural icon, Bob Ross. We watched intently, half expecting him to dip his brushes in some green acrylic and draw “a happy little tree” on the white skin of bongo. But alas, our expectations were smashed in this and many other respects; AM’s songs would be more at home as a backdrop to a rom-com than as a prelude to Charlotte Gainsbourg.

Next to take the stage was a duo, under the guise of Jogger, who would at once test the strength of Element’s speakers and the nerves of many in the audience who were forced to cover their ears while trying to remain hip. Setting the pace for Jogger was Jonathan Larroquette, a high strung, Andrew W.K.-esque manipulator of laptop and controllers, who paid as much attention to his hair as he did the infinity of knobs spread out before him. At times, Jogger sounded like a pair of fleet foxes who mistakenly ran into a patch of Mario-mushrooms with stunning results. Mostly, however, the group failed to transcend the lugubrious genre of drum and bass. After many sincere thank-yous, the band cleared the stage for the night’s headlining act.

Though IRM is Charlotte Gainsbourg’s third album, this was only the sixth stop of her first tour. On a CBC interview I had heard earlier in the day, Gainsbourg disclosed how terrified she was to take the stage, surprising for a woman who has spent much of her life in, or at least on the periphery of, fame’s blinding spotlight. Stage fright isn’t as uncommon as one might expect. Performers as renowned and diverse as Jeff Tweedy and Allen Ginsberg have both been known to incorporate violent, fearful vomiting into their pre-show routines. I was interested to see how Gainsbourg would handle her performance anxiety.

The answer to my query became obvious as soon as Charlotte took the stage: she didn’t manage her anxiety at all and, accordingly, her performance was perfect. Impossible, you ask? I think not. Let me tell you why.

IRM was written and recorded shortly after Gainsbourg’s near-death experience last year. After a minor water skiing accident (I don’t quite picture her as a water-skier, though I would like to), Gainsbourg suffered a brain hemorrhage and had to undergo an emergency operation to alleviate the pressure created by the blood that had filled her head. The very name of the new album, IRM, is French for the more familiar (to Anglo-speaking peoples, at least) MRI, a medical examination which Gainsbourg was forced to endure both before and after her life-saving operation.

And so, the woman who has been a muse for so many (including Beck, Jarvis Cocker and her father, Serge Gainsbourg, to name only a few) found her own inspiration in death. IRM is laced with references to the big sleep. On the album’s first single, she and Beck sing that “Heaven can wait and hell’s too far to go/ Somewhere between what you need and what you know.” Gainsbourg also questions our default expression of reassurance in times of passing on “In the End,” by asking us “Who’s to say it’s all for the best in the end?”

The language Gainsbourg used that night, both in body and in voice, was the language of fear. It was a language that remained paralyzed, afraid to pull hands from pockets, afraid to derive from the monotone. And what language could possibly be more fitting to express a topic that terrifies us all? What language could better express the precise realities of medical equipment that surveys, in a detached way, the “ghost image in my mind/Neural pattern like a spider/Capillary to the centre? »

Charlotte Gainsbourg was in character that night; she was haunted, and refused to be pulled from her dark place in the bright lights. Some, who had gathered in front of her, were discontent, wanting her to engage the audience more. After the first song, a particularly poignant and thoughtful young man yelled out, “You are beautiful!” in hopes of prying Gainsbourg forcefully and flatteringly from her dark shell. Instead, she laughed dismissively and shook her head.

Gainsbourg’s band was equally brilliant. Especially impressive was the main percussionist (every member of the band, even Charlotte, banged on something at one point or another), who drove the elaborate-yet-seemingly-absentminded repetitive riffs of keyboard and guitar and violin alike to climactic and expansive heights. He provided the storm to surround Charlotte’s consistently serene, if not petrified, centre. Gainsbourg has, throughout her lifetime, had the good fortune of being surrounded by incredible talent; Monday night was no exception.

Perhaps Element Nightclub was a more fitting venue for this show after all. The club seems to discourage one from settling in and enjoying anything; indeed, the experience, I can only imagine, is much more akin to an MRI than an entrancing, holy spectacle the Alix Gooldin Hall promotes. The blue lights and strange buzzes provided a more fitting context for Gainsbourg’s unsettling songs and even more unsettling presence. All in all, it was a profound, if not enjoyable (in the conventional sense, at least), experience. 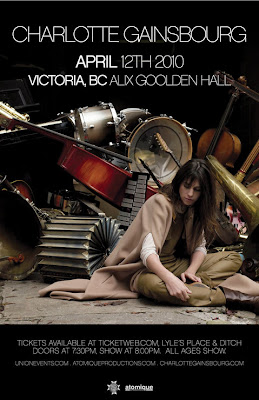