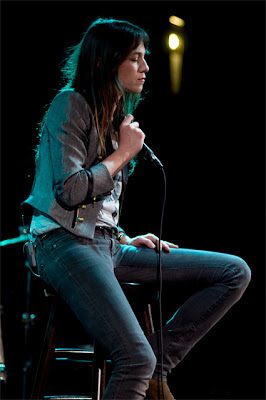 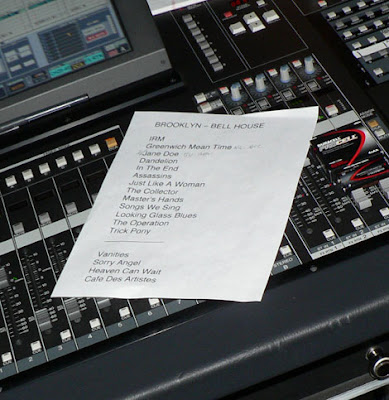 During her first and final songs Tuesday night at the Bell House in Brooklyn, N.Y., Charlotte Gainsbourg picked up a pair of sticks and wailed on a drum positioned next to her microphone stand, giving her five-piece band some additional percussive oomph.

In the hour that separated those tunes, the acclaimed actress and sometime singer was markedly less energetic at her first concert in New York City. Gainsbourg moved slowly and pensively and sang much the same way, whispering songs from her forthcoming third album, ‘IRM,’ a collection written and produced by Beck.

Gainsbourg, the daughter of French film and music icon Serge Gainsbourg and multi-talented British model Jane Birkin, also revisited selections from her previous album, 2006’s ‘5:55,’ and covered ‘Just Like a Woman,’ a version of which she recorded for the soundtrack of the 2007 Bob Dylan pseudo-biopic ‘I’m Not There.’

Tuesday’s show was the first of Gainsbourg’s three New York City gigs this week — she’ll also appear Friday on ‘The Late Show with David Letterman’ — and if she was grateful to have drawn an enthusiastic sell-out crowd, she wasn’t quite sure how to express it. She kept her head down and spoke softly, and when fans told her they loved her and threw a bouquet of flowers onto the stage, the stylish ‘Science of Sleep’ star and 2009 Cannes Film Festival « best actress » winner flashed an embarrassed smile.

She grew more assured whenever the band counted in, leaving her to coo atop acoustic and electric guitars, heavy bass and the occasional electronic beat. The ‘IRM’ songs bore the obvious stamp of Beck and on ‘Master’s Hand,’ which Gainsbourg dedicated to her collaborator, strummed violin strings and clitter-clatter cowbell coalesced into a three-minute percussive oddity, one of the night’s twitchiest and best songs.

Due to her limited vocal range and apparent aversion to volume, Gainsbourg gets by mostly on style, nonchalance and inherent coolness. With her tight waist-length jacket and skinny jeans, she resembled a young Patti Smith, yet another rocker who makes do with a less-than-virtuosic voice. Gainsbourg didn’t sing her songs so much as she presided over them, her mere presence providing some missing ingredient.

After singing ‘Heaven Can Wait,’ a straight-up rock ‘n’ roll tune that was to be the third of four encore numbers, Gainsbourg thanked fans for attending her first-ever New York performance.

« Set the night on fuckin’ fire, Charlotte! » hollered a fan at Charlotte Gainsbourg’s first live performance ever Tuesday night at Brooklyn’s Bell House. The French pop princess did just that, delicately, sensuously, using her five-piece band as the lighter fluid. Not bad for a rookie.

The 60-minute set was a testament to the power of setting the mood. A blood red velvet curtain provided the onstage backdrop, as soft blue lights illuminated the 38-year-old songstress, who spent the bulk of the show perched on a stool, like an aspiring poet at an open mic night.

The singer/actress’ power is in the nuance of her mannerisms, vocals, and delivery. On « Time of the Assassins, » a stand-out from her new album, IRM (out Jan. 26), she breathily sang as her band laid violin, floating keyboard fills, and acoustic guitar in a perfect mix. Dressed in a slim-cut denim jacket, she flipped her tangled brown hair and scanned the room with wide eyes.

Requests from the crowd for more volume were ignored. And for good reason: Gainsbourg is no Etta James; her restraint lends itself to the mystery and seductive nature of her music. These traits were in fine form as she morphed Bob Dylan’s « Just Like a Woman » into a lover’s secret, whispering the tale of a relationship’s shortcomings to the rapt crowd, which included Flaming Lips frontman Wayne Coyne.

Later, Gainsbourg stopped to thank Beck, « who wrote and produced my new album…. This next song reminds me of him. » Over acoustic guitar and layers of percussion — bongos, maracas, and a tambourine — she sang about the power of the senses (« Breathe out, come alive /  Give me a reason to feel ») in one of the night’s most moving moments.

The band — which was spot-on all night — turned up the power and volume on « The Songs That We Sing, » an orchestral number from 2006’s 5:55, and a cover of her dad Serge Gainsbourg’s « Sorry Angel, » which she talk-sang hot and heavy in French.

On « Trick Pony 1, » an IRM cut with screeching electric guitar and distorted bass, Gainsbourg and her band were at their toughest.

« Thanks for being here at my first show, » she said before her final number, IRM’s « Le Chat Du Café Des Artistes, » smiling nervously and receiving a bouquet of flowers from the crowd. « I’ll remember this. » And so will we.

When French singer Charlotte Gainsbourg talked to Billboard Magazine last month about her album « IRM, » due in the U.S. on Jan. 26, she spoke affectionately about her collaborator Beck, the intense but rewarding weeks in the studio, and the new directions of her music. But when the topic turned to performing live, she was much less effusive. « I’ve never done this, I’m very nervous, it’s so comfortable to be in a studio with someone that I admire, but for me it’s a whole different story to be bold about it, » she said. « I really want to…but I’m not sure how I’ll be able to do it. »

Words like this may come off as the false modesty of a seasoned entertainer–after all, Gainsbourg is the daughter of legendary actor/singer Serge Gainsbourg and actress/singer Jane Birkin, and is herself an accomplished actress, having won the best actress award at the 2009 Cannes Film Festival. But Tuesday’s show (Jan. 19), which was her first ever in the U.S. and reportedly her first live concert of any significance anywhere, demonstrated that a first time is a first time, regardless of one’s theoretical preparation.

Opening only with a « hello » and stopping several songs in to ask the audience, « Are you ok? », she was clearly grappling with certain tools that performers develop over time, such as feeling comfort as an exposed body on stage, coping with monitor problems, knowing what to do with one’s hands–and her naturally soft vocals, well-suited to studio balancing, at times reflected this in their pitch and volume. And yet, she’s such an appealing, disarming presence, that the audience was clearly on her side, pulling for her to clear this hurdle and hone her live show.

Also on her side was the strength of her material, and her band — the majority of the songs came from the upcoming Beck-written and produced album, an intricate, energetic set of synth- and percussion-heavy tracks that is more expansive and stage-conducive than Gainsbourg’s 2006 release, « 5:55. » Gainsbourg’s band boasted five solid musicians who clearly had her back, including an impressive blazer-clad guitarist named Nicole who switched frequently between multiple instruments and backing vocals. The set opened with title track « IRM, » a dissonant, rhythmic track driven by an MRI-emulating tone, inspired by Gainsbourg’s many hours in such a machine after a cerebral hemorrhage in 2007. During instrumental breaks in the song, Gainsbourg beat on a bongo by her side with drumsticks, possibly to clear some nerves–this seemed likely when she returned gratefully to the bongo during closing encore « Le Chat du Cafe des Artistes ». Gainsbourg was clearly more at ease with certain songs than others–album single « Heaven Can Wait, » originally a duet with Beck, was strong and energetic, while « In The End » allowed her to use her comfortable higher register and included supporting vocal effects.

Before leaving the stage, Gainsbourg gracefully thanked the audience for coming, saying « this is my first time in New York, doing a live show, and I don’t think I’ll forget it. » Someone in the audience also chose a fine moment to hand her a bouquet of flowers–unusual for a rock show, but surely appreciated. While there may be an argument to be made for focusing Gainsbourg’s musical pursuits in the studio, it was clear that everyone present was happy to be in the same room with her, and will be routing for her to push through the live learning curve.

Last night at the Bell House was Charlotte Gainsbourg’s first live solo show « literally ever, » in the words of her publicist, and the experience was a little like watching a rare Shoebill Stork at the zoo. We stared at her curiously, she sort of looked back, and after about 20 minutes, both spectacle and spectator realized this was all the other was going to do. This is not to say this was a bad way to spend an evening, by any means–monitoring Massachusetts Senate race results, anyone?–but we were not there to be regaled, we were there to investigate.

Charlotte Gainsbourg has her third full-length release coming out next Tuesday, 14 lilting serenades that some dude named Beck wrote for her. Recorded in the wake of a life-changing near-death brain surgery, it’s called IRM, the French abbreviation for MRI, and the sum total of her songwriting contributions were, in her own words, « clues »: words, titles, a book of poetry.

But this record with Beck, though a breezily soothing collection of house-cleaning pop, is not the most interesting thing about Charlotte Gainsbourg. She is far more beguiling for reasons that include, but are not limited to: the fact that this is the daughter of spellbindingly perverse cult hero Serge Gainsbourg; at 13, she shared a bed, in underpants, with him on-camera for a historically infamous father-daughter duet about incest; this year, she won Best Actress at Cannes for a graphic role that included her own genital mutilation; her gamine allure is frequently, mercifully, described as « non-traditional, » which is another way of saying that she’s sexy without being rigidly symmetrical, daintily featured, or impossibly young; she was an asset to Todd Haynes’s I’m Not There; in France, she is a cultural phenomenon who is asked to appear with the Mayor of Paris for the city’s Christmas lighting ceremony, and when our American cultural « secrets » just become national Culture, all that’s left is buy foreign. Hello, Charlotte. You are too complicated for the rest of them.

So yeah, last night’s actual performance. A casual pre-Coachella dress rehearsal of seventeen nearly seamless songs. A totally sweet version Dylan’s « Just Like a Woman » covered originally for the I’m Not There soundtrack. Passive charm, vocal delivery limited to an occasionally indecipherable perma-whisper. One explicit Beck reference: in introducing IRM-opener « Master’s Hands, » our exotic bird explained that the following tune made her think of him, then proceeded to coo it out like Tom Waits’s « Earth Died Screaming » for bi-curious girls. And yes, at various points, as my kind benefactor Twittered, « If there were a sleeping baby onstage the only thing that might wake it would be the clicks of camera phones. » All in all, it might’ve been the least interesting thing about Charlotte Gainsbourg, but when a fellow bellowing in the deep-back stage-left at Dean Wareham, who’d opened the show with Britta, asked, « How can you not love her, » I didn’t have an answer.