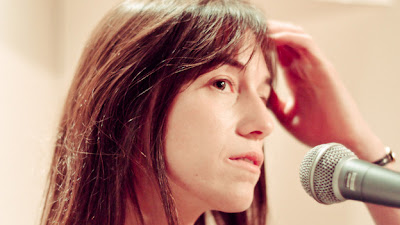 I was a little nervous to have actress and singer Charlotte Gainsbourg visit KEXP back in April, partly because there’s a huge poster of Serge Gainsbourg’s Histoire de Melody Nelson in my office. That could have made for an awkward introduction: « Nice to meet you, Charlotte. Hey, look, it’s your mom, Jane Birkin, topless on the cover of your dad’s groundbreaking album! »

Instead, I met Gainsbourg and her band down in our performance space, where they’d gathered to treat our listeners to a stripped-down acoustic set. She was visibly shy and nervous, and I learned that this was not only her first real tour, but also her first-ever live on-air session.

But once the music started, Gainsbourg really seemed to lose herself in the dreamy tracks from her third solo album, IRM, which gets its title from the French term for what Americans know as the MRI machine. Gainsbourg had a near-death experience in 2007, but as she explained, the sound of the MRI scan helped influence her latest album, and her collaborator Beck helped her spin that frightening situation into these beautiful songs.

It was also a delight to talk to Gainsbourg about her legendary father. She lit up, talking about her earliest memories of his music, and how his popularity has grown since his death in 1991. And I couldn’t hold back from telling her that I felt her dad would be proud of her music, too.