When Charlotte Gainsbourg sits down to discuss her first foray into makeup, a 15-piece collaboration with NARS launching next week, it’s telling that she doesn’t seem to be wearing any. The 45-year-old is quietly radiant, with bare skin and a guileless gaze set beneath a pair of full-stop brows. “I learned early on what suits me”—a smudge of black liner, a slight flush—“little touches“ that enhance, rather than change, her angular features, she explains. She traces that self-awareness back to age 12, when a budding film career first put her in the hands of makeup artists (later that year she made her musical debut in a duet with her late father, Serge). Over the years, she reflects, “I was able to ask people not to try to change me too much. I know who I am, I know where I’m comfortable.”

Understatement is an unusual prerequisite for a cosmetics contract, but François Nars found himself drawn to Gainsbourg’s “captivating mix of presence and humility,” which he encountered firsthand while photographing her for an upcoming project. “There is a thread of emotion in everything Charlotte creates. You can hear it in her music, see it in her acting. Her authenticity is her beauty.” 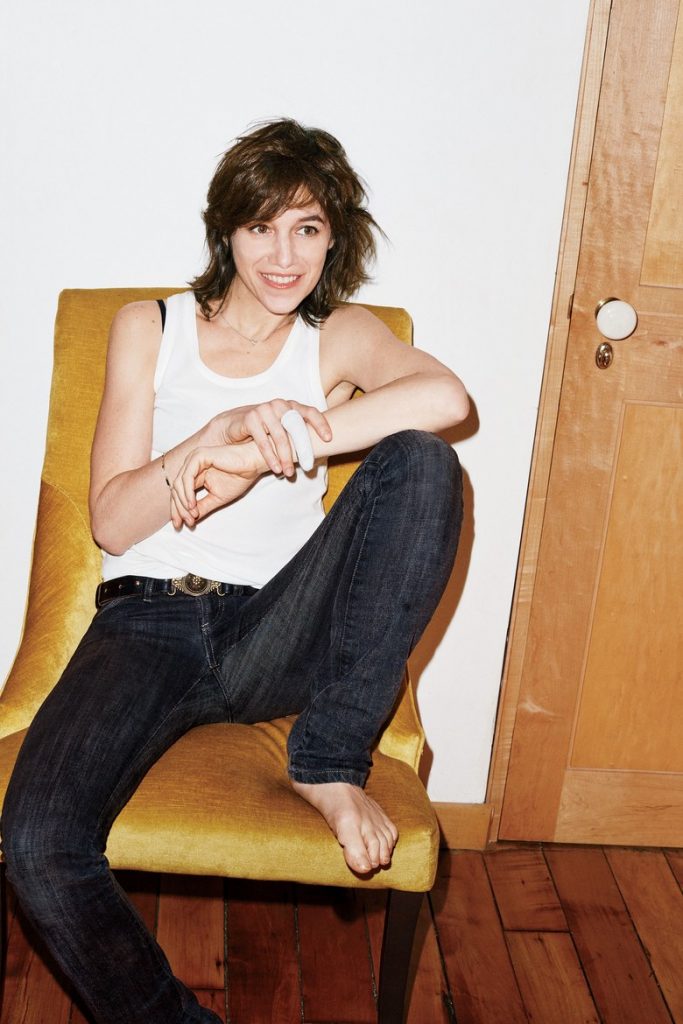 Authenticity is an overused word in fashion circles, but in Gainsbourg’s case it carries weight. The lip-to-cheek Multiple Tints feature a new translucent formula for just a kiss of color; she named the berry shade Jeanette (a pet name Serge had for her mother, model and actress Jane Birkin) and the two others after her daughters, Alice, 14, and Joe, 5. An array of eye-shadow duos, sheer liquid lipsticks, matte lip pencils, and a set of sculptural artists’ brushes round out the range. Topping it all off, there’s a trio of eye kohls—a standout dark mossy green matches the line’s custom packaging—to recreate the next-day smoky look that Gainsbourg favors on the rare occasions that she dials it up for red-carpet premieres, fashion events, and live shows. With the release of her fifth album in September, along with a trio of films (including The Snowman, with Michael Fassbender and Ismael’s Ghosts, with Marion Cotillard), the liners will be on heavy rotation.

Gainsbourg, looking every bit the French gamine in a Saint Laurent tuxedo shirt and pants, explains that her appreciation for fashion was born in the friperie, where vintage clothes “had a story.” So does her own collection (the eyeshadow Rue Allent takes after “the street where we walked our dog, Nana, in Paris”). Here, Gainsbourg shares five memories that informed her life and creative process—as a daughter, as a mother, as an artist.

On her tomboy beginnings:
“I was a complete tomboy, but my mother dressed me up as a boy. I didn’t ask for it. She bought me the boys’ uniform for school—gray Bermuda shorts, a white shirt, a blue jumper, and a blue blazer—but my sister had the girl’s uniform. So she wanted a boy, for sure! She cut my hair short, and people in the street called me ‘Mon petit gar,’ short for garçon. I didn’t feel bad about it; it was just the way it was. Later in life, I thought, Why am I so uncomfortable being a girl?”

On beauty wisdom from her mother:
“She always complained that she had put on too much [makeup] in the ’60s, that the eyeliner was too strong, that every girl looked the same. It wasn’t very individualistic, so she regretted that. She would usually put makeup on in a taxi, bringing me to school. Blush was always something she did with her fingers. Mascara, I didn’t really see her put any on. And then a little crayon on the top lip. I observed—very, very much—but I didn’t try things until much later on.”

On her experience with makeup on camera:
“The first makeup artist [Joël Lavau] that I really worked with was on a film called An Impudent Girl. I was 14, and it was my first big part. In that film, it was all to do with emotions, and [Lavau] was a real artist; it was very, very tactile, the way he would work with his hands. He went for all the details he could observe and enhanced them, like marking the veins in blue. Since then I’m always trying to help the character with makeup that will [further] the emotions, like redness when you’re about to cry. All the imperfections, that’s what I like.”

On growing up alongside iconic parents:
“When I worked with Beck, he said that you have to start [writing] every day—don’t think about it, just do it. It was too embarrassing; I couldn’t because of my father. He’s on a pedestal, so of course what I’m going to come up with is not good enough! It took me all those years to finally think, I don’t care. [My mother], for me, was the most beautiful woman that existed. At the same time, when I looked at myself in the mirror, I thought, in comparison, where do I start? But she was always very sweet, saying that she felt the same because her own mother [the English actress Judy Campbell] was such a beauty. Being uncomfortable was sort of our trademark.”

On helping shape her daughters’ approach to beauty:
“It’s very surprising—because I can’t do anything about it! It’s just happening. I think the least I say, the better. I just want them to explore and not to feel restrained, and I hope that they’ll be as comfortable as possible in comparison to me. It took me such a long time to accept anything about myself, so I’m just watching them. I think they’re on a good path.”

Published by Vogue.com, on April 5, by Laura Regendsdorf. A feature on Charlotte Gainsbourg and the new NARS collection appears in the April issue of Vogue.