Trending
You are at:Home»Tour»Rest Tour (2018)»Charlotte Gainsbourg review – legacy and legend meet in a strobe-lit icon (The Guardian)
By Aurélie M on 30 mars 2018 Rest Tour (2018)

Village Underground, London – 5 / 5 stars 5 out of 5 stars.
With a whisper of a voice, Serge’s daughter channels her father’s lascivious magnetism into a mesmerising, euphoric show

There are many ways for a shy performer to deal with their anxieties. One is to adopt a larger-than-life stage persona. There are crutches, such as ’s piano, and props such as Sia’s surrogate performers. Or, like Andy Partridge and Tracey Thorn, you can just not bother performing. rarely tours – not in six years – because she used to worry about people witnessing her onstage discomfort. But as she made last year’s superb Rest, a lucid confrontation of her father’s and sister’s deaths, she realised she no longer cared. “I don’t want to pretend that I’m comfortable, that I have a big voice,” . “And it’s not that it’s suddenly that I feel it’s enough. It’s just that that’s who I am.”

Still, Gainsbourg is almost invisible during parts of this one-off UK show. She sits at a keyboard, not facing the audience, or stands grasping the microphone with both hands. Her excellent band’s heavy refashioning of Rest’s asphyxiated lounge pop and off-kilter funk dominates her insistent whisper of a voice: as on Ring-a-Ring o’ Roses, it often sounds as if a rocket is taking off, an impression matched by a synth player pulling cables in and out of a vertical modular rig that resembles a flight deck. The musicians are framed by striking white neon squares that flash violently, though Gainsbourg is never lit directly and assumes a silvery form in the strobes’ haze. 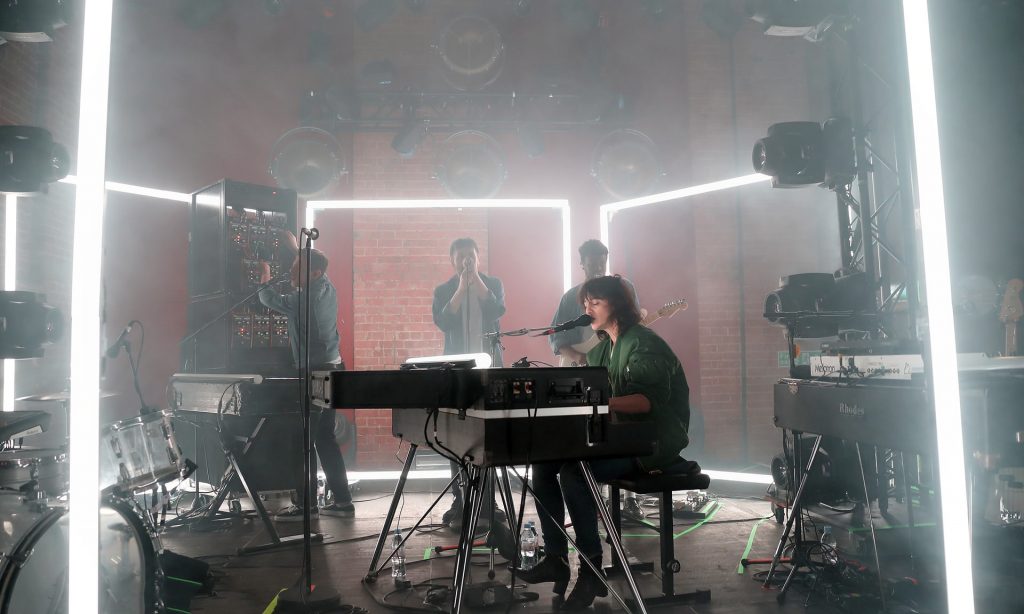 For a presence so spectral, Gainsbourg emphasises musical physicality: the funky Songbird in a Cage (written for her by Paul McCartney) sounds almost like a Herbie Hancock breakdown; suddenly all the light is shocked out of The Songs That We Sing as if a star had collapsed. A clubby tone pervades Sylvia Says, then goes supernova on Deadly Valentine: frenzied white strobes strafe the venue’s brick walls, distortion roars and the band play thrillingly with tension and release. It’s a moment of real club euphoria that you wish would last longer, and it reveals Gainsbourg’s intentions: total sublimation, for the crowd to dissolve in the music as much as she does – an elegant and provocative way for her to manage fear.

The set mostly revolves around Rest, and a few old songs – best of all, her teenage singles written by her father. On Charlotte Forever, she finds a completely different voice when she channels Serge: lasciviously lizardy and totally unsettling. Written when she was 15, it prophetically imagined Gainsbourg’s mythos: the extent of her stagecraft tonight is strolling across the front row, aware that fans don’t expect a performance so much as her beguiling presence. The encore’s Lemon Incest restores her to a mode in which she has always felt wholly comfortable – singing (in French) about “the love we will never make together” with her father – and which scandalised a nation. As if to transfer her discomfort on to the audience, she reaches a mousy falsetto apparently undimmed since she first unleashed it in 1984, aged 13.

Also in the encore, a gasped cover of Kanye West’s supremely self-loathing Runaway fits Gainsbourg’s self-effacing scheme. She sits at the piano, lit from behind. It makes looking at her blinding, but her silhouette appears in such sharp relief on Village Underground’s back wall that you can make out individual tendrils of her shaggy bob. It’s the perfect image: a suggestion, a black hole – the understanding, part of her father’s legacy, that in pop, mythology trounces reality.