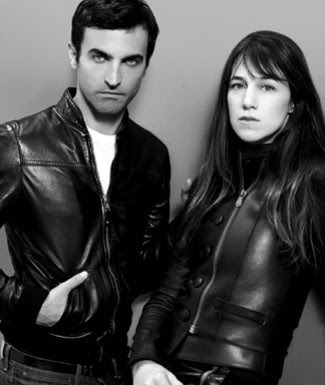 In this era of agent-brokered designer/muse relationships and pay-for-play red-carpet dressing, what Nicolas Ghesquière and Charlotte Gainsbourg share is unusual, if not downright oldfashioned: a friendship—one based on more than a mutual taste for radical fashion moments. Both are quiet, limelight- eschewing characters who make bold choices in their work. Gainsbourg bravely tackles risky films such as last year’s horror headtrip Antichrist (for which she won Best Actress at Cannes). Ghesquière, of course, has spent nearly 13 years at the pinnacle of Paris fashion, marching Balenciaga’s style army— and, arguably, the rest of the fashion universe—forward in immaculately constructed, spacey silhouettes, Nike-meets-Gehry heels, and the odd pair of metal-plated robo-leggings. Long before the designer knew that Balenciaga Paris, the brand’s first fragrance in 55 years, would feature notes of violet leaf, cedar, and patchouli, he knew Gainsbourg would be its face. “For me, she represents real talent, vision. A true beauty, too, of course,” he says. “But it’s really about the choices she makes every day.”

ELLE: Charlotte, you’ve described your discovery of Nicolas’ clothes as a revelation.
Charlotte Gainsbourg: When you find a silhouette that’s so close to your own…I felt like myself, and at the same time, I was taken somewhere else. Just looking at his clothes, you want to project yourself into them.

Nicolas Ghesquière: I had a feeling that I knew her before we met. One year, she wore a vintage Saint Laurent dress to Cannes; it was gold with one shoulder. Today, everybody would say, “Oh, wow, vintage!” But back then, it was completely out of time; it wasn’t right. To me, it was so right. I thought, She can wear that and be so cool? That’s someone I would love to dress.

ELLE: It’s fitting, then, that one of your first big projects together was for Cannes in 2001.
Gainsbourg: I was part of the festival jury and needed a wardrobe—10 days of clothes. You need something that puts a little distance between what you really are and what you want to show; it’s a shield, a protection. The first night at Cannes, we chose a suit that made me look like a little soldier, and that was exactly the feeling I had.

Ghesquière: I didn’t want her in head-to-toe Balenciaga, like, “I’m wearing this brand.” I said, let’s mix, use some vintage, and choose things from your wardrobe. It’s naive, maybe, but I want you to look like you went into your wardrobe and put the outfit on. It has to tell that story.

ELLE: Still, you both seem slightly wary of the red-carpet phenomenon.
Gainsbourg: It’s not something that I do very well; I’m always embarrassed. You see pictures of all the beautiful girls who know how to pose and smile—I’m not a professional in that way.

Ghesquière: I disagree! Few women are brave enough to take the risks you do.

ELLE: Is that why you don’t dress more stars for these events?
Ghesquière: It’s strange to see someone who’s so incredible in a movie suddenly become this nostalgic image of Hollywood glamour….It’s 2010. I’d rather work with someone who likes what I do than create something for the red carpet that won’t make me happy. It gives us visibility, but not the kind of visibility I’m looking for.

ELLE: What is the essence of Balenciaga today?
Ghesquière: Casual things elaborated upon from a collective idea of streetwear; sporty elements, which are a part of me; mixed with—and this is the difficult part—the graphic, radical tradition of Cristobal Balenciaga [who founded the house in 1918].

ELLE: Your clothes suit a particular type of woman, but a successful fragrance has to please a crowd.
Ghesquière: I like the idea of touching more people than we can with fashion. What’s fun about Balenciaga— the handbags had a big success without advertising or promotions or logos. Suddenly, women wanted one because they saw another woman with it. It was like a tribe. With fragrance, I hope women will recognize one another as they did with the bags.

ELLE: Charlotte, you started off by spritzing it on your luggage?
Gainsbourg: I’ve never worn perfume before. I liked the idea that it spread into my clothes and the objects I was carrying before I actually wore it. Now I enjoy it on my skin, but it came gradually.

ELLE: Being the daughter of Serge Gainsbourg and Jane Birkin must have had a tremendous influence on your style.
Gainsbourg: I grew up with the idea that once you found yourself with your clothes, why change? In the ’60s, my mother was very trendy; she wore everything. But later it was jeans, old T-shirts, much more androgynous—the same stuff every day. My father, too, had the same pair of jeans, the same shoes, the same color. For a long time, my uniform consisted of a trench coat, wide flared jeans, and these little bottines—I copied a pair that my mother had in this theater place. I had, like, 10 pairs of the same shoes.

ELLE: Nicolas, people often describe your work as futuristic.
Ghesquière: It’s called futurism because it has to be called something. But I don’t think it’s futuristic. More than anything, I’m designing for a woman of today. I want to be a witness of my time. But every Balenciaga show is like a laboratory. I put pressure on myself to propose something new—I think it’s the minimum that you can do as a fashion designer.

ELLE: But what about all those sci-fi shapes?
Ghesquière: I do love science-fiction and horror movies. Dario Argento films, De Palma’s Carrie and Blow Out, Alien, The Grudge.

ELLE: Are your clothes supposed to be scary?
Ghesquière: A bit. I like the scary part. That confidence, the distance Charlotte talked about? Clothes are a good way to define that. Balenciaga is architectural, strong. That’s what I like.