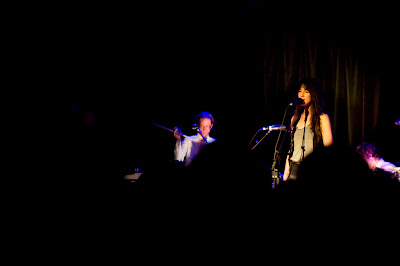 Last night the Crocodile Café turned into Seattle’s French Quarter, with plenty of conversations en français and a soupçon of striped shirts and berets, as Franco-British (or is it Anglo-French?) singer-actress (or actress-singer?) Charlotte Gainsbourg performed to a packed house.

In the first U.S. date of her first true tour, the soft-spoken Gainsbourg charmed the crowd with a 20-song set (four and a half were in French), concentrating on her rather remarkable current album, “IRM,” where she turned a near-tragedy into beautiful music.

Now, this “IRM” isn’t the last half of “SQUIRM.” That, capitals and all, might have summed up her debut recording (at age 12), “Lemon Incest,” which was a duet with her father, Serge Gainsbourg. To be sure, Papa was a strange homme, but also a musical iconoclast who acquired a great deal of hipster cred, especially after his death in 1991; he was sort of the Beck Hansen of his day. His legacy is kept alive by Charlotte’s mother, British actress-singer Jane Birkin.

“IRM” is actually French for MRI, the medical (now musical) instrument Charlotte Gainsbourg had plenty of experience with after she nearly died of a cerebral hemorrhage a couple years back. That ordeal inspired the creation of her third album (after the ‘86 Serge-directed “Charlotte For Ever” and the ‘06 “5:55,” with music by the fellow Parisians in Air), which was written and produced by the aforementioned Beck.

The ambitious yet engaging “IRM” recalls her film work with the (yes) engagingly ambitious director Michel Gondry (she starred in his “The Science of Sleep”), if perhaps not with the less-cuddly Lars von Trier (”Antichrist,” for which she won the acting prize at last year’s Cannes).

Gainsbourg was backed Wednesday by a Beck-selected five-piece band, led by his keyboardist and musical director Brian LeBarton. (I was afraid it was going to be two turntables and a microphone.) The strong group proved invaluable for the singer, whose vocals were the very definition of “understated,” at least when she wasn’t channeling Dad’s manly style on one of his songs or getting her Piaf on with a raucous version of “Le Chat du Café des Artistes.”

Opening with the title song of “IRM,” Gainsbourg enhanced the album’s MRI-inspired soundscape with her own percussive efforts (at times she also added minimal keyboards). Beck’s near-impressionistic lyrics, highlighted to best effect on a layered version of “La Collectionneuse” (that was the half-French song), showcased the singer better than her other, wordier offerings. The notable exception: Bob Dylan’s “Just Like a Woman,” given a fragile, child-woman arrangement that wouldn’t have been out of place on the third Velvet Underground LP (that was “The Velvet Underground”).

Opening with a set of Brazilian-tinged electronica, L.A.’s AM was OK, although he and his two bandmates might consider changing their name to ZZZ. Also from Los Angeles, Jogger followed by at least quickening the pace to a, well, jog, but the duo’s nervous energy didn’t carry over into the music. 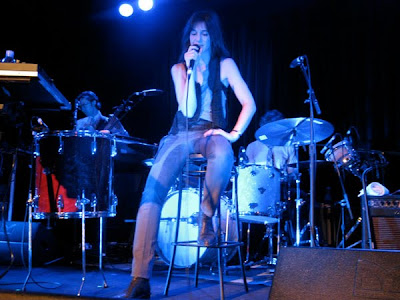 Charlotte Gainsbourg’s blue blood is one of the best kinds. She is the daughter of French music icon Serge Gainsbourg and British actress Jane Birkin. When she stepped on the stage of a sold out Crocodile on April 14, she was facing a new challenge (it’s her first tour ever), and her parents would have surely been proud. She came to Seattle to promote her third studio album, IRM, which was inspired by several trips to the hospital in a period of six months. She had to go through several procedures where her brain was scanned while she lay immobile inside a large tube (IRM is the French acronym for Magnetic Resonance Imaging). Inspiration can come from the strangest places.

On stage she was very shy and would thank screaming fans saying nice things (most of them in French) about her and her band throughout the performance. Her shyness was not exactly surprising, though. She recently talked about stage fright with Sonic Youth’s bass player Kim Deal for Spin’s anniversary issue. “I’m very nervous. What if I’m terrible?” she says about her debut in front of an audience as a singer.

She wasn’t terrible at all. The set started with the title track and its repetitive hypnotic beats reproducing the MRI machine sound along with lyrics about ghost images in her mind. She revisited not only her previous albums but also her father’s repertoire and even Bob Dylan’s. As she said herself at some point “she’s daring now”. The cover of “Just Like A Woman” was a nice surprise and Gainsbourg sang it sitting on a tall stool, which gave a more intimate feel to it. Her whispery soft voice fit perfectly into Dylan’s lyrics.

“Trick Pony”, one of the strongest tracks of IRM, closed the main set and it was full of energy. Not only for this song in particular but for all of them, her band was simply excellent. They had a lot do deal with and delivered brilliantly. Someone even screamed, “your drummer is amazing!” to which she promptly responded, “yes, he is” with a very big smile. People were delighted and the encore just doubled the feeling. The slightly faster-paced “Voyage” made the song even richer than it is on the record (the violin interventions sounded great) and turned the Crocodile into a club with smiling people dancing shamelessly. An unrecognizable “Le Chat Du Cafe Des Artistes” followed. There is an electronic background now and it was an all around reinvention for the lo-fi original track. Finally, the second cover of Serge Gainsbourg, “Couler Café” (the first one was “Hotel Particulier”), made the considerable number of French people in the audience very happy and sing at the top of their lungs. The initially timid singer was now dancing and having a great time. It was a little piece of France right here in Washington State. “I think the crowd will not like me”, she said on the Spin article. Your predictions could not be more incorrect. The crowd loved you. Merci, Charlotte. 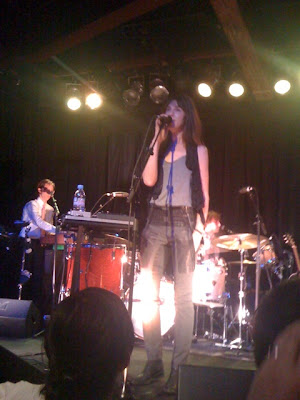 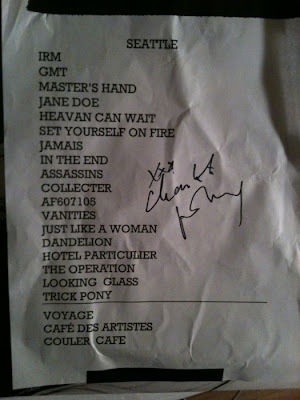 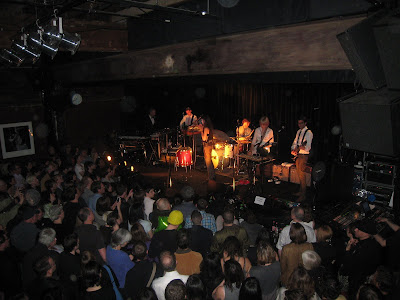 Photo published by Mother Of Style 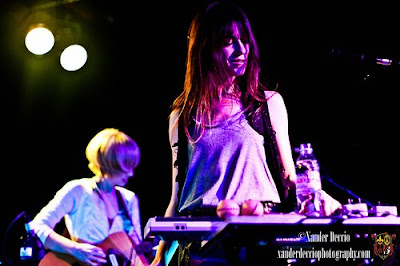 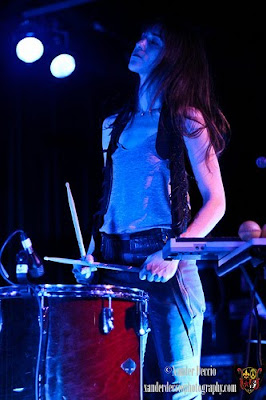