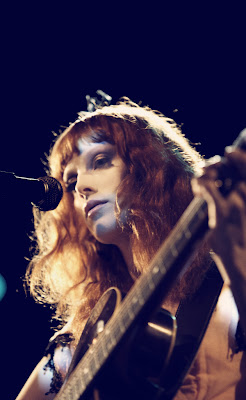 For years, models who made records have been greeted with a brutal skepticism fueled by the notion that they are better seen than heard cooing over Eastern European dance tracks or crooning in broken English while the guitarist from a failed indie-rock band gently weeps alongside them. But there was a time, from the mid-1960s through the late 1970s, when model-singers like Nico, Jane Birkin, and Grace Jones actually ruled the earth from the musical fringes, doing groundbreaking work that ultimately didn’t capitalize on their physical beauty so much as use it as a means of exploring bigger, more complicated ideas. Milla Jovovich and Carla Bruni-Sarkozy took up the cause throughout the 1990s and the early 2000s, having both written and recorded multiple albums, which conferred upon them the rarefied model-musician status of having had actual musical careers before they assumed their present occupations as international action-movie heroine and first lady of France, respectively.

Now the model-musician baton is passed to redheaded British-born beauty Karen Elson, whose debut album, The Ghost Who Walks (Third Man/XL, to be released May 25)—which takes its title from a nickname given to her in school because of her pale skin—may very well set a new kind of standard. The record, which was produced by Elson’s husband, Jack White, is a 20th-century-Americana-laced gothic song cycle, shot through with blues and folk references and dripping in Southern melody. As a vocalist, Elson isn’t quite a novice; for the last seven years, she has been a member of the New York City cabaret troupe The Citizens Band and has recorded with Robert Plant and Chan Marshall, among others. Actress and fellow singer Charlotte Gainsbourg recently spoke with the 31-year-old Elson, who was preparing to embark on a spring tour.

CHARLOTTE GAINSBOURG: Before going in to make The Ghost Who Walks, did you create any rules about what you wanted to do?

KAREN ELSON: Yeah, absolutely. In that sense, making this record has been quite an interesting experience. I’m sure you probably know the same feelings from making your own music. As a model, I am at the mercy of everybody else. It’s much more of a situation where I go to work, put the clothes on, get in front of the camera, and then go home. But in that process, I never really have control over any of it. So, putting out a record, it’s such a brilliant opportunity to be in control of things. It’s my world, my music, and I can put it out there in a way that is meaningful to me. In doing that, I definitely had a set of boundaries in place already—particularly when it came to what I was going to do and the family.

GAINSBOURG: Working with Jack on this record, did you ever feel intimidated at all—not because of the music he does, but because he’s your husband?

ELSON: Oh, yeah. I mean, I’ve been in a New York City–based cabaret for the past seven years called The Citizens Band. It’s possibly one of the most brilliant things I’ve ever been involved with. And Jack saw me sing in the cabaret quite a few times. But, honestly, at home I would hide—I would play my songs really in isolation. I would lock the bathroom door and hide. Eventually he was like, “Why are you hiding this from me?” And I realized that it was because Jack and I, in our marriage, have a relationship that is obviously very separate from the persona of who Jack is and the persona of who I am—our relationship is this very separate world we’ve created for ourselves. And I just got really intimidated by the idea that Jack may even for a second question my intentions toward him, or even look at the songs I was writing that mean so much to me and say, “Well, that’s wonderful, Karen. Anyway, I’ll see you soon! Keep hacking it!” I was afraid of his . . .

I shouldn’t say judgment, because Jack isn’t judgmental at all about those things. It was just the idea of Jack, who he is, that made me quite skeptical about even playing him a song I wrote. But ultimately he sort of forced me to sing him one—and he didn’t hate it! So we just went into the studio and started. Jack is a powerful man in general—he just knows how to bring the best out of anybody. And I think he just didn’t judge what I was doing harshly and didn’t make me feel like it wasn’t real or valid or a fake thing for me to take on board. If anything, since day one, he has always been supportive, so I just had to get over it. And once I got over it, it was a really brilliant experience. As a husband and wife, you’d think that would be a disaster, you know. You hear so many stories. . . . [laughs]

GAINSBOURG: The studio is in your home, right?

ELSON: It’s in the middle of our garden, basically.

GAINSBOURG: By the time you went into the studio, did you have the whole album prepared?

ELSON: At that point, I had a lot of songs written, but a lot of them were halfway done. I had a diary full of lyrics and whatnot and a little voice recorder of guitar riffs. I played Jack a couple of the songs that I had almost finished, and once we got into the studio and started recording them, it was a very interesting experience because all the loose ends got tied up. There were definitely some songs that I wrote the day before we went in, and giving myself a time limit helped. You know, there were moments when we were meant to go into the studio at 10:30 A.M. or 11 A.M., and I was still frantically scribbling down lyrics. But somehow, having that pressure really helped me just deliver what I needed to. Having children, you have so much more structure in your life. The open-endedness of being a single woman is gone, you know? It’s sort of like, from 1 P.M. to 3 P.M. the kids are going to take a nap, so now I have time to sit down and write the lyrics, or once they’re put to bed, I have a few hours to focus on those things. I need that. It’s a very strange process, really—I can never predict what’s going to happen. It always feels uncomfortable and awkward. I constantly have a devil on my shoulder telling me that what I’m doing is really horrible, and then somehow the lightning strike happens and everything comes together. I’ve just realized I have to live with that devil on my shoulder a little bit more.

GAINSBOURG: Did you have visual inspirations while you were recording?

ELSON: Absolutely. I read this book last year about the Great Depression and the Dust Bowl by this writer Timothy Egan. It’s called The Worst Hard Time [Houghton Mifflin]. For the past few years—particularly from being in The Citizens Band cabaret—I’ve become very obsessed with that part of America and American history. I feel like it was such a prolific time—and such a desperate time. It was one of the biggest man-made natural disasters that ever happened in America, and I’m obsessed with the imagery that it evoked. There’s this one Dorothea Lange photograph of a woman holding her children; she has the most weatherworn face. For whatever reason, those images really haunted me and definitely shaped the record. The book infiltrated me on some level, and ultimately I felt like that was translated into the lyrics. It’s just the idea of losing everything and having to survive for the sake of your children—for the sake of surviving. I don’t know why those particular images—quite morbid, dark things—just kept prevailing as I was writing the record. And I don’t know what that necessarily means about me, but it was just something that really pulled me in. So much great music came out of that period as well—Woody Guthrie was born through the Dust Bowl, in a sense, and there are so many songs he’s written which are based on that spirit. There are many parallels to our times as well. It’s been a strange few decades, and I just keep wondering, What will my children and their children think about the times we’re living in?

GAINSBOURG: Do you feel like you’ve connected to American culture?

ELSON: I don’t know. I’ve been such a gypsy in my life because I was born in northern England and grew up there until I was 16. But I’m 31 now, so I’ve lived almost half my life in so many other countries that I don’t really know what nationality I am. I mean, I’ve got a British passport and an American green card, but I don’t know where I’m from anymore.

GAINSBOURG: But do you miss Europe?

ELSON: I definitely miss Europe. I miss the European way of life. I just really appreciate just that sort of existence. But, at the same time, I’m very bewitched by the idea of America. America’s still such a baby in the grand scheme of things. Its history is still relatively young in comparison to many European countries’. There’s something about being in America that still feels very foreign to me, but it’s incredibly enchanting as well. Particularly being in Nashville—it is such an American city. I mean, it is such a different world. But I like feeling a bit of an outcast where I am. I’ve always been that way. Somehow, I fit in by not fitting in. Luckily I get my fixes of being in other places because I still travel so much. It’s going to be an interesting next few months going on tour and bringing the kids.

GAINSBOURG: Can you bring them with you?

ELSON: I’m going to try. I mean, they’ve been on the road before, when Jack has been on tour. It seems a lot easier than it actually is, but the kids enjoy it. They love being in the bunks—I mean, they think it’s the funnest thing ever. They think it’s like camping.

GAINSBOURG: Are you and Jack going to tour together?

ELSON: I think probably not—just for the kids’ sake. I think we’re going to try and juggle the tours so if I’m out on the road, he’ll be home with the kids, and if he’s out on the road, I’ll be home with them. Jack produced my record, and he has been so supportive and inspiring, but I don’t want to crash worlds too much. I do feel like I have to go out on my own and earn it myself.

Charlotte Gainsbourg is an actress and musician whose most recent album, IRM, was released in the U.S. in January.