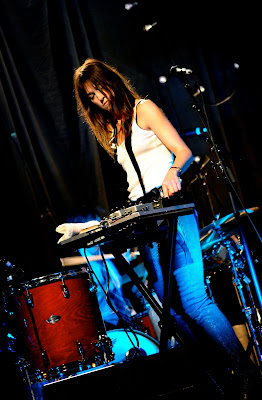 Charlotte Gainsbourg emerged onstage looking all the celebrity she is, which is saying something, given that she is essentially French royalty (she’s the descendant of Serge Gainsbourg and British actress/vixen Jane Birkin, as well as being a serious actress in her in own right). Supermodel-lithe, she wore glitter-striped jeans decorated with patches of black leather and wide belt, which she combined with a white wife-beater (the French probably have a better name for this garment), as well as a black bowtie that hung undone around her neck. Her boyish frame was juxtaposed by a very feminine mane of dark hair cascading around her fragile features and down her back. After walking intently to centre-stage, with her five-piece band behind her, she stood for a moment, in what seemed an awkward stage stance, her shoulders stooped photogenically – she might have been posing for Vogue or Elle. Read the rest of the review here and gorgeous photos by Emmanuelle Prompt here

… When she came out, you could hear people in the crowd gasp as they looked on at her, amazed by her presence, persona.. all of it combined. She came out with these striped pants, that had leather pockets and back side to them, which were bizarre in the most incredibly sexy way, and yes, I’d love to know where she got them from. She also had on this thin strip of a black scarf like thing that just hung around her neck, contrasting with her white tank top.

Her band was a pretty amazing crew. They all had character, even the bass player hidden in the back corner, and all playing with instruments of all sorts to get the sound of Charlotte. She had this fuzz pad thing, not sure what its called, but depending on where you touch it, and how you touch it, it creates space effects, which in my mind give her sound extra goodness… Read the rest of the review here