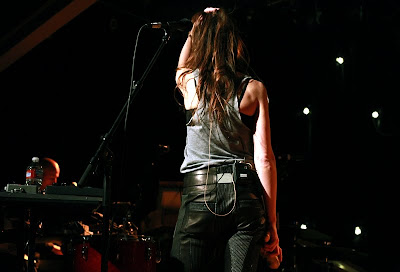 Thursday night, the actress and chanteuse Charlotte Gainsbourg performed music for about 75 minutes in Portland’s intimate Wonder Ballroom for a crowd of, I don’t know, 4-500 people. (I was standing up front and didn’t get a good sense of the size of the audience.)

Gainsbourg hasn’t had a hit record ever, save « Lemon Incest, » a creepily ambiguous tune she recorded with her father, the great poet and songwriter and performer and provocateur Serge Gainsbourg, when she was about 12. And she has only three albums, one nearly 25 years old, the other two only slightly esteemed, despite the extensive contributions of Jarvis Cocker and Beck to the finished products.

So, you see, I wasn’t drawn by music.

Nor, really, was I drawn by Gainsbourg’s acting, as much as I’ve been beguiled by her presence in such films as « The Cement Garden, » « The Golden Door, » « I’m Not There, » « The Science of Sleep, » and, especially, « Antichrist. » I find her a brave performer, and sometimes quite powerful, and always attractive, but not to such an extent that I’d fork over good money merely to be in her presence for an hour or so.

No, I was drawn by the idea of Charlotte Gainsbourg, or, rather, the idea of what she carries around in the very being of herself. Her father, as I say, was one of the most important Francophone artists since World War II. Her mother, Jane Birkin, has had a long acting career, has sung, has modeled, and has written and directed. Uncle Andrew Birkin is a writer-director. Half-sisters Kate Barry and Lou Doillon have modelled and acted. Husband Yvan Attal is a popular writer, director and star of French comedies. (Hell, her godfather was Yul Brynner!) 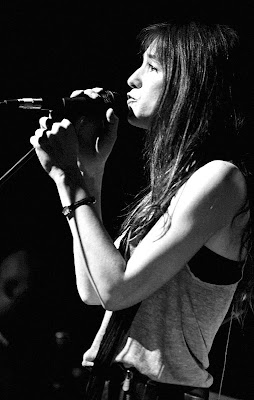 So, in the vein of, oh, Anjelica Huston or Sean Lennon, Gainsbourg is born to traditions of creating and performing, and, it seems to me, has lived up to that inheritance in choosing her film roles and making her music. On screen, she has a delicate air, like someone who has stepped out of a renaissance painting and is disappointed in the realities of a three-dimensional, active world: wise and sad and so fragile. (And yet ferocious, too, if there’s a call for it.) Musically, she whisper-sings in a manner that recalls Marlene Deitrich and Marianne Faithful, to name two likely muses: a classic Euro-pop diva with a lace voice floating over pulsing clouds of sound. There’s a hip-swaying quality to much of her work and a moodiness: you can imagine it being played all over the world in a certain kind of worldly nightclub.

Daddy’s girlThat’s what we saw at the Wonder last night: a dozen or more songs from her two albums of the ’00s — « 5:55 » and « IRM » — a truly gorgeous cover of Bob Dylan’s « Just Like a Woman, » and two songs by her dad: « L’Hotel Pariculier » and a terrifically rousing version of his Caribbean-inflected « Couleur Cafe, » which ended the encores. (The band, whom she only introduced by first names, were, coincidentally, first-rate.)

She’s not a born stage performer, not really. Simply dressed, standing stockstill, only minimally responding to the beat, she stared into the middle distance as if making out the words or the meanings to the songs she sang on some faraway wall only she could see. Now and again, during an outro, she’d employ her skinny arms (she doesn’t have Madonna’s training habits, I can tell you) to bang on a drum, or she’d fiddle with a synthesizer.

But principally she seemed focused on getting the songs right. Case in point: she was an entire verse into singing one particular song when her band director stopped playing keyboards and berated the sound mixer for losing something in the mix. There was an adjustment and the song started anew. Gainsbourg said nothing during this mini-storm, and only looked slightly put out by it, and only then for a moment. When the song began again, she launched right back in from the top, just like a seasoned screen actress whose big scene had been interupted by a technical snafu.

There wasn’t much banter, either. She mentioned that she’d never been in Portland before (I could listen to her say « Portland » in her nasal, English Channel accent all night), spoke briefly about her musical collaborators, mentioned that she’d never dreamed she’d have the nerve to perform one of her father’s songs, thanked folks in the crowd who yelled out that they loved her or thought she was beautiful. It was a nearly chaste performance in many ways: minimal, clean, pure.

So if I’m not recommending her music with terrible enthusiasm, and I’m not boyishly enthralled with her acting, and I’m not (I swear) a dirty old man who just wanted to be near her, even in a crowd, what is it that drew me to the show and made me so happy to have seen it?

Well, there’s an aura to Charlotte Gainsbourg that transcends her work and even her not-insubstantial abilities and talents. I think she’s got gifts both in music and in drama, and she’s a beauty of the quirky sort that happens to appeal to me. But the thing that made me fork out money and stand in rapt attention before her is that she’s a worthy vessel for a certain kind of art-as-life tradition that feels, I think, more European than American. The children of Beatles, of certain Continental filmmakers and actors, of important writers and musicians — they seem, in the traditions of France and England and Italy, among others, to bear the resposibility of their names and their cultural heritage in a way that Americans don’t see as useful or practical.

Charlotte Gainsbourg was born to music and acting and the flouting of conventions, and she accepts that onus as her birthright, and she carries it forward into the world with courage and conviction and talent and a great, great deal of grace. And that was worth paying to see in person. 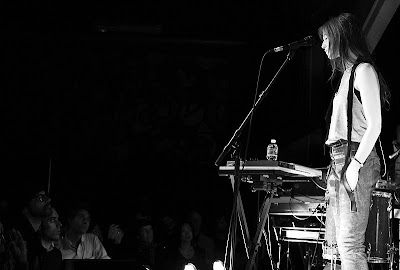 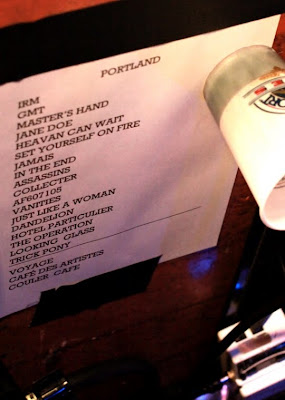 All photos by www.qromag.com and much more to see there!
concert concerts Live on tour Portland tour dates Wonder Ballroom