Trending
You are at:Home»Interviews»French Icon Charlotte Gainsbourg on Finding Success in Your Forties
By Aurélie M on 28 novembre 2017 Interviews, Interviews in english, Presse, Rest (2017)

The new generation of #WomenWhoDare are those who refuse to conform. They dare to do the impossible, encouraging young visionaries to break—not just push—boundaries. Here, Charlotte Gainsbourg reveals how to follow your dreams regardless of age for our 2017 Women Who Dare series.

Charlotte Gainsbourg is having the kind of busy fall few can imagine. The 46-year-old award-winning French actress, musician, mother and New York transplant, known equally for her roles in Lars Von Trier’s films as her perennial “French girl” style status, is promoting three films (Snowman with Michael Fassbinder, La Promesse de l’Aube, and Ismaël’s Ghosts, the director’s cut of which just premiered at the New York Film Festival). She’s also celebrating a makeup collection with NARS, and is unveiling her first studio album in seven years, ironically titled Rest, all at the same time.

“It’s happening all at once! But I guess it’s always like that,” Gainsbourg jokes in her Anglo-tinged accent, inherited from her mother, the British actress Jane Birkin. “You work on an album for four years and suddenly it all happens.” 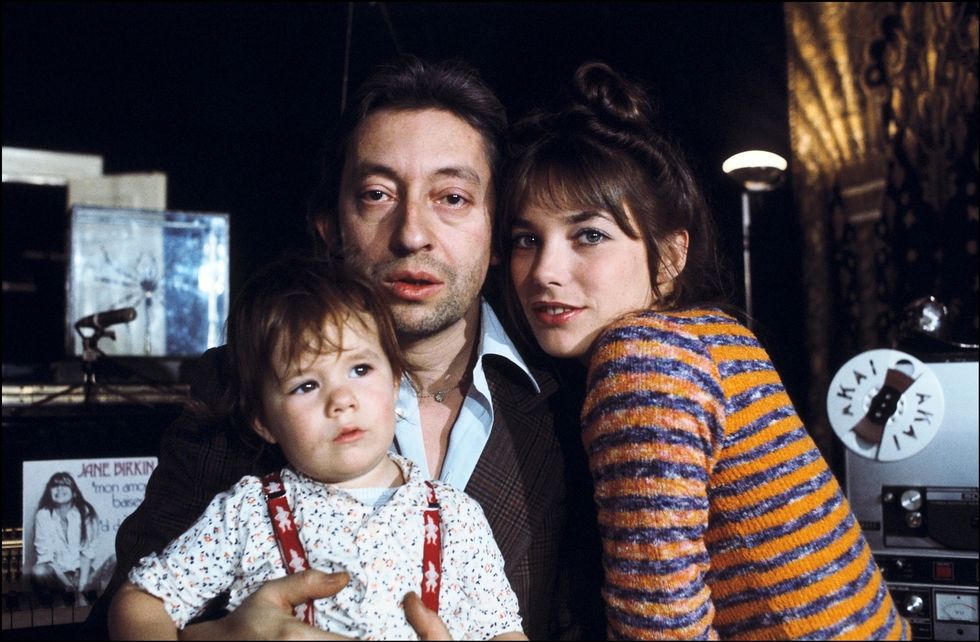 After making her musical debut at 12 with her father, the French pop icon Serge Gainsbourg, and releasing a full album at just 15, more than 20 years would elapse before Charlotte released her critically acclaimed albums 5:55 in 2006, IRM (written and produced by Beck) in 2009, Stage Whisper in 2011, and this fall’s Rest. Gainsbourg often attributes her career sabbatical to her father’s unexpected death from a heart attack at 62, and her reluctance to pursue music without him. One of her most ambitious, and personal projects to date, Rest is a lushly-created, digitally-layered electro dreamscape that’s equal parts hope and melancholy. In many ways, it’s a vulnerable tribute not just to those Gainsbourg has lost, including her half-sister, the fashion photographer Kate Barry, who died in 2015, but also an exploration of other luminous versions of herself found while exploring this grief.

Encouraged by fellow musician and long-time collaborator Connan Mockasin, this is the first time Gainsbourg has penned her own songs (singing in both French and English). “Connan and I started writing what was the very beginning of this album isolated in a house in Brittany. He convinced me I was ready—that I had this capability and he wanted to prove it to me,” Gainsbourg reveals. He turned out to be right, and the album, recorded between a Brooklyn basement, her home in France, and the legendary Electric Lady studio in Greenwich Village, was produced by Sebastian of Ed Banger records. It also features collaborations with Daft Punk’s Guy-Manuel de Homem-Christo, Paul McCartney, and Arcade Fire’s Owen Pallett. But make no mistake—Gainsbourg is the real star, not only writing and performing, but shooting the photos, creating the album art, and even filming the music videos (« Deadly Valentine », which features a stand-out choreographed dance between Gainsbourg and Blood Orange’s Dev Hynes).

« It’s just so personal,” Hynes tells me by phone, speaking to the deep emotional layers of Rest. “It was interesting because Charlotte’s really in control of this whole project. What she wants, she sees it through and it happens. Maybe it’s coming from an acting background. Wanting to make sure you can deliver what you’re trying to promote. But I see her drive in all the fields—and in music now, too.”

You’d think after spending most of her life in the limelight, Gainsbourg would be used to the press. Yet, you get the impression she’s uneasy. “From a very early age I was doing interviews, » she explains, « but I didn’t understand what ‘promoting a film,’ or an album, really meant. I didn’t want to answer questions. I was completely introverted. I had done my work and enjoyed it immensely, but I didn’t want to have to talk about it. So I played a game of not compromising and not giving in to people’s curiosity.” This instilled a fierce protectiveness of her own autonomy, both creative and otherwise, and for the most part she’s elected to work exclusively on projects she’s passionate about. “I’ve done films that I thought I ‘had’ to do, or I thought were a ‘good idea’ to do—but with bad reasons. And it was always a mistake, » admits Gainsbourg. « I can’t fake it! I need to be able to be honest. If not, I find it very boring to say the same things over and over again. If they’re not felt and sincere, it’s horrible. »

But even Gainsbourg isn’t immune to the pressures of Hollywood; particularly ageism. She reveals the liberties publications and press agents have taken in retouching her photos. “It’s like, ‘Give me back my age! I do have wrinkles! I don’t look like a 20-year-old,’” she says with a hint of exasperation. Still, she admits to the eternal appeal of youth, especially in her field. « Cinema is made for beautiful people, you can’t pretend that beauty and age have no importance in this job, » she says. “You can feel the decline when you hit 40. I had an agent who said, ‘It’s the beginning of the end.' »

But Gainsbourg has found inspiration and strength in her latest work, including her role as a Polish minister in La Promesse de l’Aube, which required her to age from 30 to 60 onscreen. “It was such a relief that I didn’t have to worry about my looks, » says Gainsbourg. « It was so liberating to not care about if you slept enough, or if you looked 30 or 40. People were working on my face to make me look older, uglier, fatter, it was fun.”

This year also gave Gainsbourg other, more personal epiphanies. “I realized that aging had made me look like my father and not at all like my mother, » she jokes— “My father with a skirt! So I have big regrets that I didn’t take more features from my mother.” This, however, made it much easier to get into character. “The part was so close to my background [Gainsbourg’s family is from Russia], and my grandmother, that it made it really beautiful.” 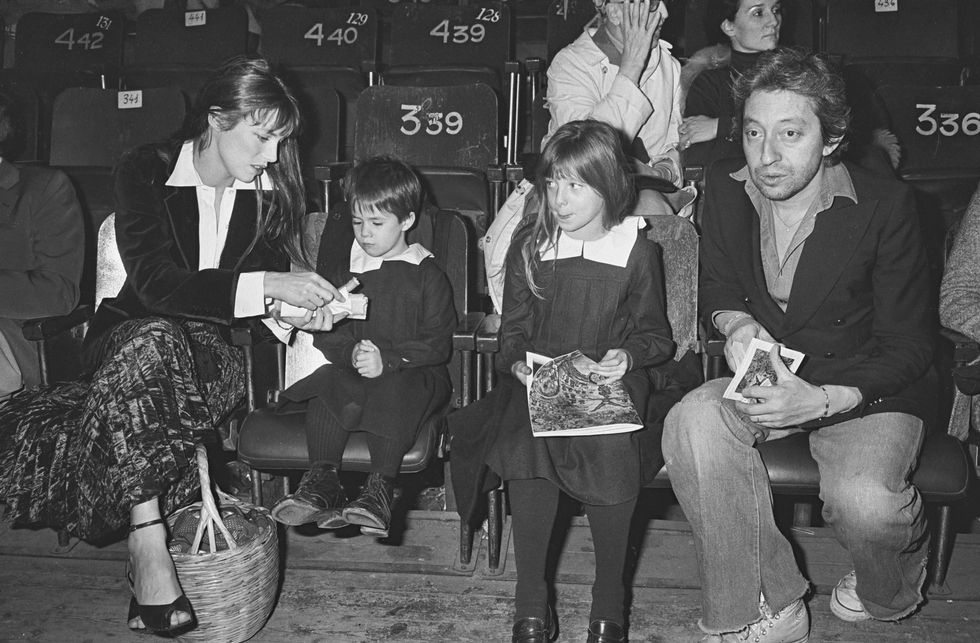 In some ways, her music has become a respite from the glare of Hollywood. Looks, she believes, can come second to talent, where age can actually be an asset—giving artists a unique and hard-earned perspective. “Even though music is often made by young people, you’re also talking to young people. I remember my father, when he was in his 60s, realizing much of his audience was not even 20. He was beaming with pride.” Still, even for one of France’s most glamorous public figures, it’s hard to escape a sense of urgency that comes with aging. “I do believe that there’s a sort of panic of ‘time is catching up,’ and there’s something frightening about that, for sure. But I was able to do new music in a different way that’s even more inspired.”

Quick to admit her blessings—high-profile and accomplished parents, a career that began so early with financially stability—she admits her life also comes with a pervasive amount of public scrutiny. After her sister died, she needed space, anonymity and fresh air, so she did what generations of creatives have done before: she moved to New York City. “I had the impression that in France, if I did something, everybody would look,” she confesses. “In New York, nobody cared. I could do anything I wanted. I was completely anonymous in the streets.” This meant seriously exploring photography, expanding her lifelong drawing practice, and even making music videos. “It was wonderfully freeing to feel like I could ‘have a go.’ I don’t believe that you can’t do anything after a certain age. On the contrary, you’re maybe more eager to try new things.”

Age has also given Gainsbourg an important perspective on her art. “I realized recently that I love imperfection, » she says. « We’re in a world that is digitally perfected. You have to look perfect, speak perfectly, be politically correct. Everything is polished. That imperfection is what makes me human, and what makes people interesting.” She credits her new album with helping to return to her roots and tapping into the voice she had at the beginning of her career, when it was just her and her father. “Until now, I was always trying, pretending I could sing a little better than I could. But then I remembered what my father used to tell me, which was, ‘If you don’t have a good voice, then don’t take singing lessons. Don’t try and polish.’”

Gainsbourg believes it’s these imperfections that make her work so intimate and unique. “What makes my voice [special] is that it’s fragile, that it’s imperfect, so now I understand that sort of ‘seeking the imperfections’. This is also what Lars Von Trier taught me. It’s a real lesson that I want to sort of worship, today.”