Trending
You are at:Home»Balenciaga»Gainsbourg pour Balenciaga Hiver 2008 2009
By Aurélie M on 16 juin 2008 Balenciaga 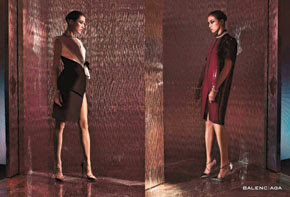 NEW SOPHISTICATE: Shortly after christening the Balenciaga flagship in Los Angeles last April, designer Nicolas Ghesquière barred shoppers from it for two days. But he had a « beautiful » reason. Ghesquière used the new 5,000-square-foot store on Melrose Avenue in West Hollywood as the location for the French brand’s fall-winter campaign shoot, featuring actress Charlotte Gainsbourg. The ads break in the August issue of British Vogue, followed by other fashion titles.

« For me, she is one of the most inspiring girls in the world, » Ghesquière enthused. « She’s really representative of what France is today. She was always so modern in her choices and her way of being. She’s so iconic for me.

« Still, Ghesquière chose to portray his friend of 10 years in line with his hyper-chic and « more mature » fall-winter collection. That meant a sleek chignon, strong makeup courtesy of Pat McGrath and arch couture poses — a contrast to the bohemian, « undone » style Gainsbourg has portrayed in other campaigns and in countless editorials.

« It was fun to play with her in a very sophisticated way, » Ghesquière said, allowing that some viewers may not immediately recognize the star of such films as « 21 Grams » and « I’m Not Here. » The daughter of French music deities Serge Gainsbourg and Jane Birkin, Gainsbourg has also recorded several albums.

David Simms shot the campaign, with the Los Angeles light rebounding off the boutique’s gleaming marble floors and etched metal walls. Gainsbourg follows actress Jennifer Connelly in the Balenciaga spots, and marks a turn towards personalities at a time when many European brands are going back to using supermodels. Ghesquière said he likes to work with film stars. « They are used to playing characters and go deeper into the image, » he said. « There’s definitely a celebrity effect when you shoot an actress. There’s a real frisson. » — Miles Socha