Trending
You are at:Home»Balenciaga»Thomas Whiteside shot Charlotte Gainsbourg for Elle’s « Women in Music »!
By Aurélie M on 18 juin 2010 Balenciaga 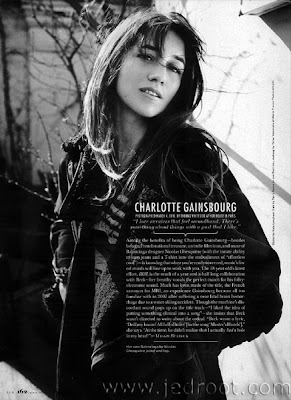 Photo: Thomas Whiteside; styled by Kate Lanphear
Her own Balenciaga by Nicolas Ghesquière jacket and top.
Photographed March 4, 2010 at her house in Paris
http://www.jedroot.com/

“I love sweaters that feel secondhand. There’s something about things with a past that I like.”

Among the benefits of being Charlotte Gainsbourg—besides being a French national treasure, an indie film icon, and muse of Balenciaga designer Nicolas Ghesquière (with the innate ability to turn jeans and a T-shirt into the embodiment of “effortless cool”)—is knowing that when you’re ready to record, music’s finest minds will line up to work with you. The 38-year-old’s latest effort, IRM, is the result of a year-and-a-half-long collaboration with Beck—her breathy vocals the perfect match for his folky-electronic sound. Much has been made of the title, the French
acronym for MRI, an experience Gainsbourg became all too familiar with in 2007 after suffering a near-fatal brain hemorrhage due to a water-skiing accident. Though the machine’s discordant sound pops up on the title track—“I liked the idea of putting something clinical into a song”—she insists that Beck wasn’t directed to write about the ordeal. “Beck wrote a lyric, ‘Drill my brain/ All full of holes’ [for the song ‘Master’s Hands’],” she says. “At the time, he didn’t realize that I actually had a hole in my head!”—Maggie Bullock