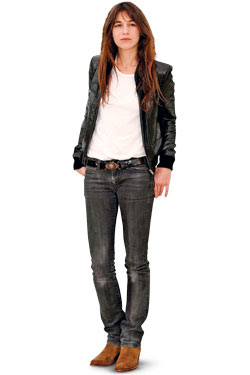 Born to fame, or at least experience, the singer, actress, and fashion muse is just glad to see her kids again, at last.

Charlotte Gainsbourg has met fellow musician Kim Gordon only a few times—“At the Café de Flore,” she says—but she found her “very, very sweet,” and so on a recent rainy morning, Gainsbourg traveled by giant tinted-window SUV from the Bowery Hotel to the Upper East Side, where the John McWhinnie gallery was exhibiting a collection of Gordon’s emphatic paintings of words.

Gainsbourg’s voice is incredibly quiet, not much more than a whisper, really. Her accent is almost British, except for the inflections, which are entirely French—it makes perfect sense, given that she’s the daughter of Serge Gainsbourg and Jane Birkin. She is very tall, with long, lank brown hair, and she is dressed in jeans and cowboy boots, a huge Balenciaga bag (she’s Nicolas Ghesquière’s muse as well) slung sideways across her chest. She is very beautiful in the way that American women always want French women to be beautiful: no makeup, slightly careless, incredibly thin.

Gainsbourg’s in New York finishing up a nine-city tour that accompanied the release of her album IRM. It began in Vancouver; then she was off to Coachella, where she sang as the sun began to set, and Montreal. There, the crowd went wild (“Overexcited,” she says).

After a volcano-related delay, her family—children ages 7 and 12 and her actor-director partner, Yvan Attal—arrived from Paris to keep her company. “They knew how nervous I was, so they kept trying to cheer me up,” she says. “And with children it’s lovely, because they don’t really care. They had jet lag, so they just went to sleep.”

Gainsbourg’s first record was Charlotte for Ever, which was released in 1986, when she was 15. That was also the year she won a César, a French sort-of Oscar, for acting in a film called L’Effrontée. In the clip of the ceremony on YouTube, she looks like a little boy who’s woken up from a nap. Her father kisses her on the mouth in congratulations, and then she is so overcome that she sobs. Before that, though, there was “Lemon Incest,” the song she recorded with her dad when she was 13. “Lemon Incest” had a video too, of Charlotte and Serge lolling around semi-dressed in bed, which was all pretty clearly designed to push boundaries, or buttons, or something. “The album was not a great success,” she says now with a little shrug. “I was really very unconscious of what I’d done and what I wanted.”

Not that all this experience has made matters any less scary. Gainsbourg gets terrible stage fright. “My father and my mother were always completely terrified, so I feel it is very natural to feel that way. And, of course, it’s the same with acting, being very shy in life and wanting to push yourself. I like being nervous. I experience the terror.” She smiles. “Always work with oppositions!” Before going onstage, Gainsbourg always drinks a glass of red wine.

In the ground-floor gallery at John McWhinnie are a series of white canvases painted with dripping black slogans: the names of noise bands, lyrics by the same, Gordon’s own personal catchphrases. I WANT YOU SO BAD, says one (Richard Hell, the gallerist explains). “Do you know noise bands?” the gallerist asks Gainsbourg. She smiles. “I like listening to new music,” she says, “but I always go back to Dylan or Pink Floyd.”

In two upstairs galleries are more of Gordon’s work (PISS PISS PISS, MOAN MOAN MOAN; PAID IN PUKE), accompanied by an installation of magazines and other artifacts. Gainsbourg contemplates a bookshelf displaying old 45s. “It’s funny,” she says. “In America, you always know what someone will have that is ‘French.’ Françoise Hardy,” she says, pointing up to one album cover, “and my parents”—she points to another, on which they’re photographed in profile against a blue background.

“My mother always made it seem like heaven to make a film,” she says, a sentiment Gainsbourg shares, in her low-key way. “Enjoying myself,” she says of acting, “forgetting myself in scene. Really, it is very selfish.” When she gets back to Paris, she expects to hear from Lars von Trier about starting a new film (she starred in his graphic Antichrist last year). If she doesn’t, she will continue her tour.

And does Gainsbourg have aspirations to paint as well? “I draw,” she says. “Ink drawings. Gouache. And on this tour I have been doing auto-portraits because I can’t invent. I can only do what I see. It is only for my pleasure, it is not something that compels me. I do not have to put my guts on the table; for me, it is more simple. Very unpretentious.”