Trending
You are at:Home»Interviews»A Gainsbourg Moves Beyond Her Legacy (New York Times)
By Aurélie M on 23 janvier 2010 Interviews, Interviews in english 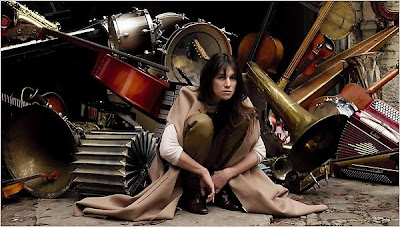 IT doesn’t take long for “IRM,” the new album by the French singer and actress Charlotte Gainsbourg, to start sounding Gainsbourgian. The record opens with “Master’s Hands,” a ballad full of tense guitar and banjo picking, clattering percussion and strings that dart and swoop.

In a voice pitched between a hiss and a whisper, Ms. Gainsbourg sings:

It is Ms. Gainsbourg’s signature vocal maneuver. It is also her birthright. That dreamy whisper-singing — a style that gives every lyric the feeling of a slightly scandalous confession — was pioneered by her father, the Gallic pop great and provocateur Serge Gainsbourg, and perfected in his famous collaborations with Ms. Gainsbourg’s mother, Jane Birkin, the English actress and vocalist.

It can be hard to get past the pedigree when considering Ms. Gainsbourg. She has had a long and successful career as a film actress, starring in dozens of movies, including Michel Gondry’s “Science of Sleep” and Lars von Trier’s controversial “Antichrist,” for which she won the best actress award at the 2009 Cannes Film Festival. (Ms. Gainsbourg’s husband is the actor and director Yvan Attal.)

But as a singer, the legacy of her father looms large. Like Julian Lennon, like Ziggy Marley, like Jakob Dylan, she is blessed and burdened with a name that not only defines an illustrious musical era but seems to sum up a national sensibility. Her father’s witty, smutty, sonically inventive recordings are the most celebrated French pop of the second half of the 20th century. Hits like the heavy-breathing Gainsbourg-Birkin duet “Je T’aime … Moi Non Plus,” from 1969, capture France’s sexiness and urbanity as surely as Bob Marley’s songs speak to the Jamaican soul and Bob Dylan’s distill American roots music tradition.

From the beginning the musical career of Gainsbourg fille has been entwined with that of Gainsbourg père, who died in 1991. Ms. Gainsbourg made her recording debut in 1985 at 13, a duet with her father on one of his juiciest succès de scandales, “Lemon Incest.” On Ms. Gainsbourg’s 2006 CD “5:55,” her first album after a 20-year musical hiatus, she sounded weighed down by her patrimony, singing in a voice delicate to the point of self-effacing amid orchestral pop arrangements that explicitly echoed her father’s records.

“Just because my father was such a genius with his songwriting, his lyrics, his music — that doesn’t mean I have any gift,” Ms. Gainsbourg, 38, said in a telephone interview from her home in Paris. “I don’t believe in that. I have my own path. But the comparisons are constant. And the comparisons are heavy to wear.”

In an e-mail message Ms. Birkin asserted that her daughter has already found her own identity. “I think she has established, in two very big-selling records, that ‘she is she,’ not Serge, not me. But, sweetly she has our voices in her head.”

Yet on “IRM,” which was produced and largely written by Beck, Ms. Gainsbourg’s anxiety of influence seems to have dissipated. She still sings in that patented Gainsbourgian hiss on “Master’s Hands” and several other tracks. But she branches out elsewhere, ambling through folk-rock ballads, venturing into dance-punk and blues, and letting Beck swamp her voice in layers of distortion. The result is an engrossingly eclectic pop record and a kind of coming-out party: the first time that Ms. Gainsbourg the chanteuse has displayed the charisma of Charlotte Gainsbourg the actress.

“Ideally music is more instinctive than acting,” said Ms. Gainsbourg, who speaks softly and precisely with a slight British accent. “On this album I tried to let my instincts guide me and tried not be so guarded — tried to let accidents happen.”

It was a less happy kind of accident that spurred “IRM” in the first place. Vacationing in the United States in the summer of 2007, Ms. Gainsbourg had a minor fall while water-skiing. Six months later she went to the doctor in Paris, complaining of chronic headaches. An MRI scan revealed that she had suffered a cerebral hemorrhage and was lucky to be alive.

Ms. Gainsbourg underwent successful emergency surgery but remained convinced that she was unwell, continuing to schedule MRI examinations for months after getting a clean bill of health. “I was so preoccupied with my condition, always thinking that I had something,” she recalled.

When she turned her attention to a new record in early 2008, she had two goals in mind: to sing about her medical crisis and to work with Beck, whom she had met some years earlier. “I’d admired him so much,” she said. That spring, she traveled to Beck’s home studio in Los Angeles, where the pair began working through a few songs. One of the first results was “Master’s Hands.” Written entirely by Beck, it included lyrics that eerily evoked Ms. Gainsbourg’s medical experiences: “Drill my brain/All full of holes/And patch it before it leaks.” Yet Beck had said he was unaware of Ms. Gainsbourg’s brain hemorrhage until after the song had been composed. (His sound engineer pointed out the coincidence.) For Ms. Gainsbourg it was a sign that this was a good musical match.

“Beck had a way of guessing what I was thinking and feeling without my telling him,” she said. “We never discussed these things explicitly. He asked me what I wanted the album to sound like, but I didn’t want to close myself in. So I didn’t give him too much direction.”

Beck said he thought it was crucial to avoid specific Serge Gainsbourg references. “I knew it was important to avoid outright pastiche, but more importantly, to help her find a sound that could be her own,” he said in an e-mail message. “But she will always have to find a balance with where she comes from, honoring it, while retaining who she is and her own distinct difference.”

The partnership really clicked with the title track, “IRM.” (“IRM” is the French equivalent of “MRI,” an acronym for magnetic resonance imaging.) Over the many months of her health crisis Ms. Gainsbourg grew oddly fond of MRI scanners and their grating, grinding sounds. (Think of an idling combine harvester.) She found audio clips online, which she brought to Beck as the building blocks for a song. Like many of the songs on the album, “IRM” juxtaposes severity and dreaminess, with a keyboard chiming above the blare of the MRI samples. Ms. Gainsbourg sings lyrics that move between the medical and the metaphysical:

Ghost imagining my mind Neural pattern like a spider… From the cortex to medulla Analyze EKG Can you see a memory?

You can detect plenty of Beck in that song, from the surreal turns of phrase to the slacker’s monotone in which Ms. Gainsbourg sings. At times the album sounds uncannily like a sequel to Beck’s “Modern Guilt” (2008), with songs like the blues-rock “Trick Pony” staking out a similar sonic and spiritual middle-ground between the digital present and the psychedelic 1960s.

Ms. Gainsbourg, of course, is used to working collaboratively, in music as in film. Her formative record-making experience, the 1986 album “Charlotte for Ever,” was written and produced by her father. On “5:55” the main songwriting duties were handled by the English singer and songwriter Jarvis Cocker, the former frontman of Pulp, and a self-styled roué in the Serge Gainsbourg mold. She studied classical piano as a child, but is staunchly self-deprecating about her musical ability.

“I’m attracted to but very intimidated by music,” she said. “I’ve never experienced any real creativity through music myself. I did ‘Charlotte for Ever’ through my father. It was always through him.” As for Beck: “He gives the impression that he’s constantly thinking about music. He has a guitar that seems to be sewn to his arm. I was trying desperately to write a couple of lines, and in a few a minutes he had a whole song. I suggested some of the song titles, wrote a line or two here and there. But really, Beck did everything.”

Whatever heavy lifting Beck shouldered on “IRM” can be seen as a repayment of debts to the Gainsbourg family. From the beginning, Beck’s own music has been audibly inspired by Serge Gainsbourg. (He made the influence explicit on “Paper Tiger,” from his 2002 album “Sea Change,” which sampled sections of Gainsbourg’s 1971 song “Melody.”)

The questions are: What does Ms. Gainsbourg bring to her musical endeavors beyond her impeccable pedigree, her success as an actress and her status as a left-of-center fashion symbol? Is “IRM” merely the latest record in which her primary function is to play muse for a male Svengali? What are we to make of an heiress to pop royalty who bluntly declares herself musically uncreative while promoting her latest arty release?

Ms. Gainsbourg doesn’t quite answer these. But listening to “IRM” it’s clear there’s some false modesty at work. No one who hears the jaunty Gainsbourg-Beck duet “Heaven Can Wait” can doubt that they are hearing a meeting of two formidable musical personalities — and evenly matched vocalists.

“IRM” succeeds largely on the strength of Ms. Gainsbourg’s insinuating singing. She hardly raises her voice; even when she snarls, in the bustling “Greenwich Mean Time,” it’s a diffident snarl. But Ms. Gainsbourg’s performance in “Antichrist” — a role that involves extreme sexual violence, mutilation and madness — proves she is capable of heightened emotional temperature. Ms. Gainsbourg’s dulcet singing style may be a matter of limited skill. But it is also a good choice — an actorly decision, you might say, well suited to an album full of songs about disorientation and fatigue. She is one of those singers who hits harder the quieter she gets. The intensity spikes as the volume lowers.

Now Ms. Gainsbourg is ready to test whether those subtleties will translate in front of an audience. She has just embarked on her first American tour, with a band assembled by Beck. (She was scheduled to play three shows at clubs in Brooklyn and Manhattan last week.) Ms. Birkin said that her daughter’s cerebral hemorrhage “was a great jolt,” adding, “I’m sure it made her want to go for it, go for life.”

“She’s daring to be ‘her,’ singing in front of people,” Ms. Birkin wrote. “It’s like she’s wanting to live out every emotion.”

One of those emotions, Ms. Gainsbourg confesses, is stage fright. But surely a woman who learned to love an MRI machine can get over a case of the pre-show jitters? “I have to find a way of fighting my anxiety,” she said. “I’m sure I’ll find a solution. Because it’s an experience I really want to have.”