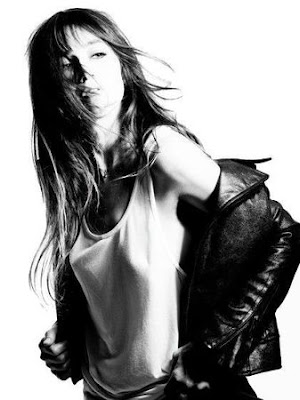 French auteur Charlotte Gainsbourg released her first album when she was 13, a collection of songs written by her legendary dad, Serge Gainsbourg.

But around that time, she also started acting. And that remained her main focus through her adult life as she’s delivered critically acclaimed performances in “Jane Eyre,” “The Science of Sleep” and other films.

Then at some point, the music bug bit her again. In 2000, she appeared on Madonna’s hit “What It Feels Like for a Girl.” In 2006, she finally got around to her sophomore disc, “5:55,” which was produced by French synth-pop duo Air and a hit on American college radio. And last year, she teamed with Beck for edgy, eclectic album No. 3, “IRM.”

Wednesday, she’ll play one of only a handful of U.S. dates at Seattle’s Crocodile Café. And recently, she took a break from rehearsing in Los Angeles to discuss her unusual musical journey.

Why such a long break before you returned to the studio?

I never did it professionally. I mean, I did it because it was my father, because I loved working with him. I did (controversial hit single) “Lemon Incest” when I was 12. When he said he was writing a whole record for me I was thrilled, but it was over in five days.

When my father died (in 1991) I felt there was no point in doing anything else without him.

I play the piano, but I play classical music, and I don’t feel I’m artistic enough to produce my own records, write the lyrics, write the melodies. It’s the process I had when I was a child. (On “5:55”) I needed Air, for instance, to write the songs and Jarvis Cocker to write the lyrics. So I’ve always needed to look up to someone, and this time it was Beck.

How did you meet Beck and what led to you collaborating?

Well, I had met him when I was about to work with Air ’cause I came to Los Angeles and (producer) Nigel Godrich was recording with Beck. So I went to the studio where they were, just to say hello. I met Beck but very, very briefly. … He was a little bit part of that same family.

So once I worked with Air and that was over, I really wanted to go in a very different direction. With Air, I could hear their sound and I could imagine my voice with their sound. With Beck, I was attracted to his work ’cause I admired him, but I had no idea what it would be like as a record. … The only thing I wanted was to go in different directions, explore things. And so that’s what we did.

Yeah, it’s a lot more of an eclectic record.

To be able to, once we had done a ballad, for instance, to then (switch) to something more electronic – it was always fun. You were never bored. It was a wonderful process.

The title is a reference to your accident. (In 2007, Gainsbourg suffered a cerebral hemorrhage related to a water skiing accident..)

Well, it was the most personal thing I could bring to the record. I didn’t think just after having had an accident that I wanted to do a record that would only talk about that.

I had to do surgery. The only way to reassure myself was to do an MRI, so I kept asking for them. And in the end they became quite pleasant. (It) was some kind of an escape when I was in that machine, hearing those sounds.

I forgot about all this, and when I met with Beck and we was started working together – I didn’t mention the accident or anything – he came up with a few lines saying, “Drill my brain all full of holes” (from “Master’s Hands.”) And I do have a hole in my head, so I thought it was quite funny.

When I came back to do another session later on, that’s when I told him about this MRI sound that I wanted. I found those sounds, and we picked a little moment. So I think a lot of other songs related to the idea of, of course, the brain, the memories, some kind of recollection.

My favorite song is – my French pronunciation is horrible, so I’ll say track No. 3 (“Le Chat du Café des Artistes.”) What is that about?

It’s a cover song. I didn’t know about this musician, a French- Canadian musician (Jean-Paul Ferland.) And Beck made me listen to this song that was done in the ’70s. It’s so original, really an amazing track. (It had) weird lyrics that I didn’t feel that close to. But then I was so attracted to the track. I kept listening to it over and over and over again.

When we were able to go to Capitol Records and have Beck’s father (composer David Campbell) do the strings, it was incredible, that session. A lot of the tracks took their real identity because of the strings, especially in that piece.

I’ve read that you were making (Lars Von Trier horror) film “Antichrist” while you were recording this album and that might have aesthetically shaped it in some ways.

It didn’t shape it with the subject. I walked away from the film not thinking about the subject of the film. But still, the impressions that I had I lived with (stayed) quite a long time afterward. I felt so completely empty and quite tired, I have to say.

(There was a) sort of emptiness I came with when I started recording again with Beck. I could feel quite fragile – a bit unbalanced. I think he felt it. I didn’t try to hide it or anything, but I think it comes out in a few songs. And then, thank God, I was able to go back to Paris, take my family here with new perspectives, new feelings and new moods that (influenced) other songs.

Click the links below to hear Gainsbourg talk about …

… recording with her famous father, Serge Gainsbourg, as a kid and returning to music as an adult.

… the near death experience that helped shape the album.