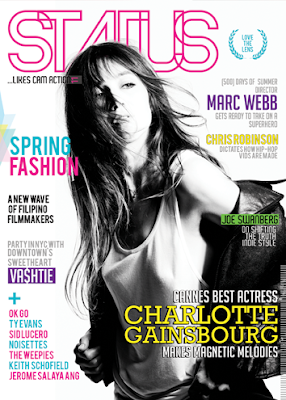 We told you in our filmmakers issue all about Charlotte Gainsbourg’s Cannes-winning acting chops, most especially her strangely provocative role in Antichrist. But besides her career in acting, she has collaborated with the likes of Beck for music that makes you want to stay still and say, “Heaven Can Wait.” Curious how that made her feel? Follow the jump to find some snippets from her interview with STATUS.

What made you decide to collaborate with multi-instrumentalist Beck?
Charlotte: For me it’s the real collaboration and I can’t do music on my own so I went towards the person that I admired most and it was Beck so the fact that he agreed to work with me was just great. The collaboration was sweet. What was interesting to me was to be able to work on a long period because it meant going back and forth from France to Los Angeles to see him, to work with him. Each time was a bit different. It was always a different story. I hoped in the end I inspired him. The album seems very personal when I listen to it…when I see it. I guess there was something that happened. There was a communication that happened between us.

How has Beck influenced you as a singer?
Charlotte: Of course I have influences. Of course I admire a lot but what I was attracted to was Beck, with the African rhythms ,reminded me of songs from my father. Apart from that, the blues song put down the line, I discovered Robert Johnson, thanks to Beck. I can’t say it was an influence but it was just the discovery doing the recording.

Describe your working dynamic with him.
Charlotte: I think I was always a bit nervous about of working with Beck not knowing what I can sing also, because he was always writing lyrics so easily and he keeps on saying, “You’ve got to try,” and it seems really easy for him so I was frustrated not to be able to write as easy as I wanted to.

How do you inspire yourself to sing?
The experience I had with 5:55 was I have to isolate myself completely to be able to sing because I was embarrassed. This was much easier. I think I have overcome some of the difficulty.

For the full story about Charlotte, grab a copy of our film issue.