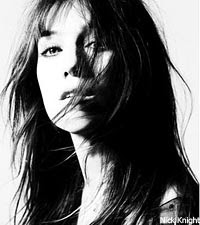 Charlotte Gainsbourg may have just finished the first leg of a successful tour (including stops at Coachella and two sold-out dates in Montreal), but the 38-year-old admits performing doesn’t come easy. Though she’s an experienced actress and her current album, ‘IRM,’ is a collaboration with Beck, the willowy daughter of late French pop icon Serge Gainsbourg and British actress Jane Birkin says singing on stage makes her nervous.

« It’s very scary, » Gainsbourg tells Spinner. « The process of recording an album or even doing a film is something very, very intimate. Even if there’s a crew behind you, you just get to know people. You’re not in front of an unknown crowd. It’s this idea that you can’t make a mistake. Which is not true, because of course you can make mistakes. »

Her live theatre experience hasn’t helped much. « I just did it once a very long time ago, » she says, recalling her 1994 turn in a Paris production of David Mamet’s ‘Oleanna.’ « It was a great play and I loved doing it. But the great thing about the play was that I could use my nervousness because it was kind of the character, which was very, very helpful. So I didn’t try to hide my nerves. »

Though not a seasoned stage actor or musician, the mother of two has acted in almost forty films and won Best Actress at last year’s Cannes Film Festival for her intense role in Lars Von Trier’s ‘Antichrist.’ « When it ended, I was really happy to take a break and to see my children again, » she says, « because it’s not a film that I could have done with my family and I had to be very isolated, so it was so difficult not seeing them. »

This may be her first tour, but ‘IRM’ — the French translation of MRI, a procedure she was subjected to many times after suffering a brain hemorrhage in 2007 during a waterskiing accident — is actually her third album. In 2006, Gainsbourg hooked up with French dream-pop outfit Air and mega-producer Nigel Godrich — known for his work with Radiohead and U2 — for ‘5:55.’ And she made her debut, a record of her father’s songs, at the age of 13, which, in part explains why it took so long for her to rediscover music.

« I never thought it would be possible after my father to go back to music just because it was such a special memory that I had, thanks to him. Because it was his words, it was his direction so I didn’t see the point, really, to do anything else without him, » she says. « And then very gradually I understood that I wanted to do something. I didn’t know how, I didn’t know with who, I couldn’t do it by myself. It was really when I met Air that I realized I could also imagine myself on their music and suddenly it became possible. »