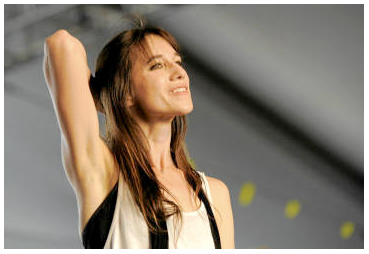 Charlotte Gainsbourg likes to draw. She especially enjoys painting with ink, and her technique goes something like this. “You put a lot of water on the paper, then you take ink and you draw on top of that,” says the French actress and singer, whose new album IRM is a collaboration with indie visionary pop star Beck. “The ink goes the way it wants to go and you can’t force it. I love the randomness.”

Surrendering control to allow discovery, finding freedom within boundaries and, ultimately, trusting life seem to be recurring themes for the 38-year-old these days.

“It is a matter of trust,” she agrees. “I [recently] realized how I love being directed because I think that’s the way I find my own freedom – inside other people’s barriers. If I have all the freedom I want, then I’m lost.”

Daughter of British actress Jane Birkin and late French pop icon Serge Gainsbourg, Charlotte Gainsbourg grew up a star. At age 13, she released an album of her father’s songs, made a movie with Catherine Deneuve and found herself embroiled in controversy over a duet with her dad called Lemon Incest. Today, with almost 40 films on her résumé, the mother of two (with partner Yvan Attal) comes across as sophisticated, smart, sweet and down-to-earth. The challenging roles she takes on reveal the strength beneath her willowy beauty: She won best actress at Cannes last year for her emotional performance in Lars von Trier’s Antichrist, playing a mother grieving the loss of a child, and riskier scenes included not only nudity and hysterics, but masturbation and self-mutilation. She begins shooting von Trier’s next project, Melancholia, in August.

“There was something very reassuring, very intense, that made me want to go as far as he wanted, which was very unusual,” she says about working with von Trier. “It was the will to discover things with him, letting go and trusting him. He said at the very beginning, ‘Because of what I’m going to ask you, you have to trust me. I’ll never put onscreen something you’ll be ashamed of.’ He was right. And I was right to trust him. He has a way of making you discover emotions, trying different things; it never stops. And it’s very, very exhilarating.”

Just before making Antichrist and IRM – which is the French acronym for MRI (magnetic resonance imagery) – Gainsbourg had brain surgery. She’d suffered a dangerous cerebral hemorrhage in a water-skiing accident. The sounds she heard in the MRI machine during frequent scans took on a weird, metaphoric quality and were not unlike music.

Although the intensity of shooting Antichrist helped put the ordeal behind her, “I didn’t want to make an album ‘about’ that accident, ‘about’ that trauma. It wasn’t the idea. But I started talking to Beck about the MRI sounds I wanted to put in a song, so the ideas of memories, the brain and recollections were quite obvious, and linked to what I had experienced.”

Released in late 2009, IRM follows 5:55, Gainsbourg’s 2006 collaboration with moody French pop duo Air, Jarvis Cocker and producer Nigel Godrich. This is also her first record in 20 years. She explains that save for the occasional vocal cameo, she’d been avoiding making music since her father’s death in 1991. “Twenty years is a bit long,” she says with a laugh.

Though she says she gets nervous singing onstage, IRM is a lovely, captivating record. Made during a series of Los Angeles sessions peppered over a year and a half, Beck co-wrote the lyrics, wrote all the music and produced, coming up with concepts that mirrored Gainsbourg’s state of being. His unpredictable, catchy songwriting and her sultry, smoky voice weave together this slinky braid of pop, folk, electronica and hints of Serge Gainsbourg’s retro legacy, by which Beck is clearly inspired. (Beck’s father, composer/orchestrator David Campbell, contributed string arrangements.) Heaven Can Wait, a duet between Beck and Gainsbourg, is all tambourines and sing-a-long chorus, while the whimsical opening track, Dandelion, chugs along at a country-pop pace. Beck’s eclectic beats and inspired noises drive the more electronic Greenwich Mean Time and, of course, the machine-influenced title track.

“There was a feel of real intimacy and being able to be very private,” she says of their creative chemistry. “It was amazing to watch him work, watch him invent songs and try to put myself into it.”

Another interesting ditty is Master’s Hands. At the start of their collaboration, without yet knowing about Gainsbourg’s accident and surgery, Beck penned the lyrics, “drill a hole in my head to let the memories out.”

“Yes, that was very strange,” Gainsbourg says. “He said, ‘I’m sorry, I didn’t realize that you actually had a hole in your head and that you’d been through that.’ It was quite funny. But it was a strange coincidence that we can’t really explain.” Which, once again, suits Gainsbourg just fine. “I like not thinking about things and just being transported into places, and then realizing how things happen. It’s quite mysterious, and I like it that way. I like just the idea of letting things happen.”

Charlotte Gainsbourg performs with her band at Montreal’s Olympia Theatre on Friday and Saturday.