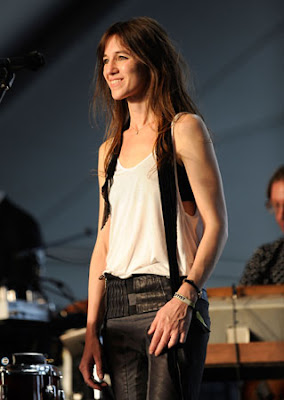 “I realized three suitcases were just too much when you’re on tour, you only ever open one of them!’ Charlotte Gainsbourg says, laughing. It’s a few days after her concert at NYC’s Webster Hall, the last stop of a month-long whirlwind, and the chanteuse/actor is grabbing a few minutes to chat with me about the exigencies of life—and fashion–on the road.

Gainsbourg is the daughter of not one but two legends—the beloved if sometimes notorious balladeer Serge Gainsbourg and the renowned model/actress/singer Jane Birkin. And, of course, Gainsbourg is a genuine style icon herself, famous for her lanky, offhand, endlessly enviable style. But she says that in truth she doesn’t think much about clothes: “Not really. I already have a job where you look at yourself all the time. It’s quite nice, but it’s very egocentric—always me, me, me.”

And, of course, when you’re hitting nine towns in four weeks, taking the stage everywhere from Vancouver to Coachella (“Completely wild!’ she marvels. “The people were wild. I’d never done a festival like that before; it was a big surprise!”), you don’t really have time to worry about what you’re wearing. “You never change, you sleep in the bus.” I am vaguely horrified, but she says no, “It was fun for a few nights—just the experience. Your time frame is completely different. One and a half hours in the evening, the show, is all you’re aiming for.”

Still, for those 90 minutes when all eyes are upon you, you have to look pretty great. “Nicolas Ghesquière made me a pair of pants, and they’re all I really wore on this tour. They’re very comfortable, heavy trousers, sort of futuristic, and a little strong. They’re sort of leather motorcycle pants but also sort of astronaut! Those are all I wore with a tank top—a tank top and nothing else.”

Is she a big shopper? “Not really. I like to shop when I am traveling. I can be excited, frantic for a day of shopping, but it goes down quickly. But there was time on this tour.” It cheers me no end when I find out that even a creature as gorgeous as Gainsbourg faces the same kind of anxieties we all experience behind the fitting-room door. “Because I have no shape—no bosom, no hips—I can’t wear many different things. Only one kind of jeans, Notify, and the same kind of shoes for three years. I never change.” Never? “I did have a period of really bad taste, sort of horrible Minnie Mouse shoes with little heels and very short skirts. But I was only twelve!”

When the occasional formal event rolls around, it helps that Gainsbourg has Ghesquière, who she has been friends with for ten years, in her life. “For black tie I ask Nicolas. We think about it together. I like his ideas; I always find something.” Gainsbourg has a knack for teaming up with the perfect partners. In the same way that she has Ghesquière to collaborate on her wardrobe, she has similarly hooked up with Beck, who wrote all the music for her current album, IRM.

“I met Beck a long time ago when he was recording in L.A.—it lasted about two minutes. I called him much later and asked him if he would work with me, and then we had this project,” she says, explaining the genesis of the album. “Even though Beck wrote everything, he was really getting into my mind. My feelings are very close to the album. Acting and singing are completely different, but I find myself trying to let go in the same way.”

Gainsbourg admits that it’s fun to dress up in character and assume a different identity when you’re making a film. “You reveal yourself, but you’re hiding behind someone. With the music, you want something not too calculated; with a film it’s all prepared and then you have to forget. The goal is the same, but the music is more intimate, more secretive.”

OK, Charlotte, one last question. I’m almost ashamed to say this out loud, but inquiring minds want to know: Do you ever tote those motocross-astronaut pants in a Birkin bag? “Oh, no. No! I would be very embarrassed with a Birkin bag! I have a Balenciaga, a big, soft one—very big! It carries tons of stuff.”