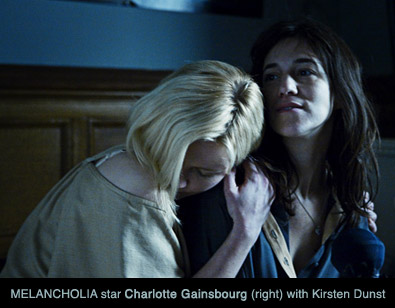 Some actresses have described working with Lars von Trier as a process akin to stage-diving into a meat grinder. Okay, no actresses actually said that, but in various turns of phrase such disparate stars as Bjork, Nicole Kidman and Emily Watson (among others) have described how making a movie with the Danish provocateur pushed them to their limits—or beyond. Sitting across a table in a SoHo cafe one recent afternoon, Charlotte Gainsbourg cheerfully said that she was only too happy to reunite with von Trier. Their first encounter won her the best actress prize at Cannes for a risk-taking (and co-star mutilating) performance in the 2009 Antichrist. « I said of course and waited on the script, » she said, « but I didn’t care what I would read. Anytime I would go. »

In the new Melancholia, Gainsbourg plays Claire, the sober-minded older sister of Justine (Kirsten Dunst)—a glowing new bride whose chronic depression turns a grandiose wedding party into a decathlon of dysfunction and eccentric bad behavior. And if that’s not bad enough, there’s a giant planet called Melancholia that’s on a collision course with Earth. All aboard for funtime. Now 40, Gainsbourg is soft-spoken with a lilting English accent, a relaxed sense of humor and a delicate, unfussy grace about her. She wasn’t dressed for the cameras, as she often is in public, and after the interview she quickly rejoined her entourage: her three-month old daughter Joe, who she carried in her arms as she whirled outside on MacDougal Street. The scene wasn’t unlike her first appearance in Melancholia, desperately cradling a child as she rushes, in paradoxical slow-motion, towards the apocalypse. Today, though, the planet was safe from destruction. Gainsbourg talked about von Trier—and the notorious Cannes press conference—why she turned down the offer to play her father (1960s rogue/icon Serge Gainsbourg), and what it’s like to take the stage as a Beck-produced pop singer. Her new live album, Stage Whisper, is out on Dec. 13.

You played a very extreme character in Antichrist and in Melancholia you’re now the voice of reason.

Well, yes. But in the end, I collapse.

It’s the end of the world, so the morbidly depressed character played by Kirsten Dunst is finally calm and in-tune with things. Of course. Did you enjoy playing the « straight man »?

Because the first one was such a great experience for me—I loved it—I was nervous that it wouldn’t be as good. And it was very, very different. The fact was that the first one, with only Willem [Dafoe] and me, felt so intimate in this cabin in the woods. And suddenly we started this second film with a wedding with 100 extras and a crew that seemed so big. It was good that it was different but it was so much different. I couldn’t reach out for Lars in the same way. And gradually we went into the more intimate scenes and then I found him again.

The wedding party sequence is quite something. How complicated was it to work with such a huge cast and a handheld camera flying around? It must have been difficult to play.

It’s difficult when you don’t know what you have to do. When it’s written it’s great because the camera moving gives you such energy. It’s a wonderful way of working because you never reproduce the same take. There’s a feeling of improving the scene all the time and just moving and you’re never bored. When you don’t know what you’re supposed to do in a big wedding scene where the dialogue goes on in one place, and you’re supposed to be there but you have to invent what you want to do and he doesn’t really care. You have such freedom that sometimes you’re a bit taken aback. It’s strange to be in control that much. But then Lars decides if he doesn’t like what you do or if he needs you to do something he’ll tell you and he decides what he wants. You can try whatever and then he’ll tell you if it’s completely wrong and it often is.

Did you feel like you were at an actual wedding?

You know, I’ve never been to a wedding. No. [Reconsiders]. I’ve been to my first wedding not a long time ago.

How was it sharing the screen with Kirsten?

Lars asked me to watch Persona, Ingmar Bergman, because of that relationship—not between sisters but between the patient and the nurse. He really put the accent on that. Also, on the kindness a sister would have for a younger sister who was sick. He really wanted something very loving, with no judgment. That was the most indication I got for being the bigger sister. It was great to shoot with her. She’s so easy. It was very easy also to have that loving feeling towards her. She’s a sweet person. I know Lars was very reassured because she understood depression on a personal level, which was important but it’s difficult to talk about her work without her.

And reuniting with Lars?

The relationship is very simple. There’s something so obvious. He knows what I get from working with him. It’s so exciting. The process is really gratifying. It’s difficult at the same time. It’s not something you do… It costs you. But I just love him also, him as a human being. And the more I know of him and his family. I find him very touching.

He said he’s never talking to the press again.

Well, after the incident in Cannes.

How did it feel to be up there at the press conference [when von Trier made his infamous « Nazi » comments]?

It was embarrassing, really embarrassing. But I wasn’t shocked by what he had said. It seemed like so much what he would do. In his own provocation—being stupid and going too far, deeper and deeper into his shit. That’s the way he is, and um… sabotaging himself.

Not unlike Kirsten at the wedding.

No. It wasn’t a big surprise, but it made such a fuss afterwards. During the conference thing, well it was embarrassing but it wasn’t dramatic. Then it became dramatic afterwards. He felt terrible, but like a child would feel terrible after a big mistake. [laughs] It’s not to say that what he said was not really… it’s not « worse, » very bad. Stupid. He’s always trying to make fun or be very cynical. He’s always putting on an act. So that was a bad act.

That’s a good way to put it. It’s said that Lars channels himself into his female characters. What’s it like to be on the other side of that equation?

In Antichrist I was really playing him and Willem was playing the nurse. This time, Kirsten was playing him—as the sick one—and I was playing the nurse. And it’s funny because his wife told me that one of the scenes where she was the most touched was the scene in the bathroom when I try and give her a bath, because she saw herself in us. That tells you how close he is to his characters. I really needed him on the first film, because I had to deal with all those anxiety attacks and I never had one. He was very helpful. He shared everything. You think you’re going to die, there’s nothing worse, but on the outside it’s not as if you’re going wild. It’s very subtle. I don’t know if I was subtle. [laughs].

Well, not with the drill! That was such a funny film, because people were repulsed by it, but at Fantastic Fest in Austin, they printed up T-shirts with a « Chaos Reigns » slogan.

[laughs]. People who love Lars’ films say they can’t even try and watch it. I didn’t think it was spectacular in a bad way. I don’t know. I thought the beginning was much more disturbing. The emotions. I know a lot of mothers who didn’t want to go because of that.


It was really poetic and genuinely haunting. Much as Melancholia, and especially the opening. Was there a lot of technical process going on for the actors?

I’m only in one of those shots. It was only technical and it took hours to set up. Kirsten went through hours of lighting and set up and putting it all together. It was very staged and controlled, the opposite of the rest of the film. But it’s a great contradiction also. With faces and people, he doesn’t want any effort made on the make-up or all the nice things. He doesn’t want us to look good. But as for the other visuals, he’s very caring about how it will all be like. Even in post-production, he was working a lot on that. 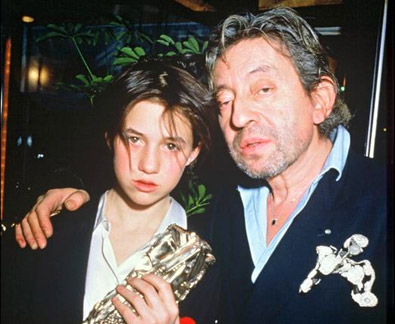 I was surprised to learn that you’d been asked to play your father, in the rather fanciful French biographical film Gainsbourg: A Heroic Life?

It was after I’m Not There and I thought, well, it is possible to play a man, why not? I refused to see any footage of my father since he died. I mean, not refused, like a big thing. But if I can avoid it I feel better. So I thought if I was able to play him maybe I’d finally be able to see him and watch him and copy him. I thought about it for one month and then turned it down. I couldn’t. And then I had my accident [a 2007 cerebral hemorrhage], which meant anyway I was on another planet.

Which then inspired your album IRM, right? I loved the sound of the MRI machine on the title track.

People thought it was weird to have something positive to say. I love the sounds. I think they are very energizing. It’s not a bad memory for me at all.

You mention chickening out on your first plan to tour. Were you afraid of getting onstage?

It’s very different. You have no shield. I’ve done theater once, but even that is different. You don’t look at the public. You’re still in your bubble. You have to play a character. This time, I didn’t want to show up with a character. I wanted to be myself. But I thought it wouldn’t be enough, because I’m not such a singer, I don’t have an incredible voice, I’m not a performer. At the beginning, I thought I didn’t have what it takes. And gradually I took such pleasure doing it and then saw that the people who were coming were not mean people ready to punish me.