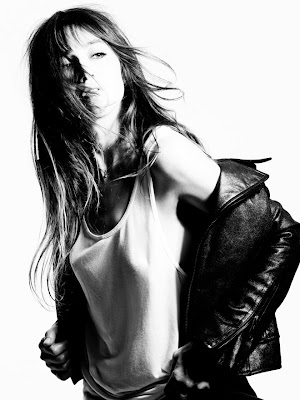 Actress and singer Charlotte Gainsbourg talked about the music and films that have influenced her when she stopped by the Wired studio recently to guest-DJ the Playlist podcast.

Gainsbourg, who starred in Lars von Triers’ Antichrist last year, played a track from her latest record, IRM, which was co-written and produced by Beck; a tune from Radiohead’s OK Computer; and a song by her father, French musician Serge Gainsbourg; among others.

After complications from a waterskiing accident nearly took her life, Gainsbourg found no shortage of emotion to draw upon when she entered the studio to record IRM. The album’s title is taken from the French abbreviation for magnetic resonance imaging — a process she became familiar with during her long hospital stint.

Who: Radiohead
Song: “Paranoid Android”
Album: OK Computer
With Kid A, Radiohead rewrote the book on what an alternative rock album could be. But Rome wasn’t built in a day. Before the band could make one of the most important records of this century, Radiohead’s members had to hone their craft. OK Computer marks the band’s transition from the more straightforward Britpop of Pablo Honey and The Bends into the genre-shattering Kid A and Amnesiac. Gainsbourg picked one of OK Computer’s most frenzied odes to modern life — “Paranoid Android.”

Who: Lou Reed
Song: “Perfect Day”
Album: Transformer
At a loss for words, Gainsbourg shrugged and said “Perfect Day” by Lou Reed was, quite simply, “perfect.” Just as Gainsbourg and Beck teamed to produce IRM, on Transformer Reed was joined by David Bowie, who produced the album with Mick Ronson, the lead guitarist in Bowie’s backing band, The Spiders. “Perfect Day” is exemplary of the mellower side of Reed — recalling the Velvet Underground’s “Sunday Morning.”

Who: Bob Dylan
Song: “Sarah”
Album: Desire
Keeping with the theme of collaboration, Gainsbourg talked of her work with Todd Haynes, director of Bob Dylan biopic I’m Not There. In the film, the folk singer is portrayed by multiple actors over the course of his life. Gainsbourg played Dylan’s wife in the scenes where Heath Ledger took on the role of Dylan. “It was a very special film for me,” she said. While shooting, Haynes made the actors playlists of songs that would relate to their respective characters. “Sarah” was one of Gainsbourg’s songs.

Who: Cab Calloway
Song: “Minnie the Moocher”
Anyone who has seen The Blues Brothers ought to recall Cab Calloway stalling for time with his hit “Minnie the Moocher.” Gainsbourg, however, was introduced to the big band classic through another iconic character of the silver screen — Betty Boop. As a child, Gainsbourg would watch Betty Boop cartoons with her father. One episode in particular “was very memorable, because of this song,” the singer explained. When Gainsbourg recently rediscovered the song, it brought back a flood of memories — she compared hearing the song to smelling a familiar but long-forgotten scent.

Who: Elizabeth Cotten
Song: “Shake Sugaree”
Album:
While recording IRM, Beck did his best to introduce Gainsbourg to some of the blues musicians that have influenced his sound. Gainsbourg discovered Elizabeth Cotten while researching blues singers online. She chose “Shake Sugaree” for it’s memorable vocal performance. “I think there’s a fragility in the voice that I love,” she said.

Who: T. Rex
Song: “Cosmic Dancer”
Album: Electric Warrior
Gainsbourg ends her Playlist podcast on a groovy, psychedelic note. She discovered T. Rex because her mother mentioned the name in one of her songs. “I never knew who it was, being a kid,” Gainsbourg said. “When I discovered [Marc Bolan’s] work, it meant a lot.” Gainsbourg said “Cosmic Dancer” and other T. Rex songs fill her with nostalgia: “I feel very attracted to a lot of his songs.”