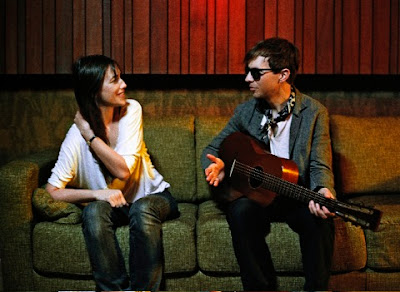 Every week or so, Jessica Suarez’s Progress Report updates you on what your favorite bands have been doing. Or not doing.

Even though her first language is French, actress and singer Charlotte Gainsbourg speaks English with a prim, hesitant British accent, a result of the lessons she took in order to star in a British film. It’s a pretty, soothing sound that crosses into her singing voice — thankfully, since her voice is her sole instrument. Speaking with her, it’s obvious that this fact is a source of both joy and anxiety for Gainsbourg. Her second album (as an adult) is a collaboration with Beck, and while she loved having him take control of the project, it’s that same lack of control that prevents her from wanting to sing the album live. Currently she’s back in Los Angeles, working with Beck and his band to figure out how to play their new songs in front of an audience, or if that’s even something she can do. « I really want to be able to do it, but it has to be a pleasure, it can’t be a terrifying experience, » she says. « I love the songs, and I love singing them, so I just have to find that pleasure again. »

She takes her time with decisions. In fact, Gainsbourg didn’t plan on making another album after 2006’s 5:55, which featured Jarvis Cocker, Air, and Nigel Godrich. Then in 2007, Gainsbourg suffered a brain hemorrhage after a skiing accident. That meant emergency surgery and repeated trips to the hospital for followup MRIs (Magnetic Resonance Imaging — IRMs in French). So in a way, even the inspiration for the album was another form of losing control. « The noise [of the MRI] is terrifying and quite disturbing, but I did so many that after a while it became music, sweet music, to my ears, » she explains. « And I thought about putting it into songs quite early. I hadn’t even thought about another album, but I definitely thought these were sounds that I wanted to be present. » The first things Gainsbourg brought to Beck during their early songwriting sessions were recordings of MRI sounds. She had found the samples on a website meant to help acclimate patients to the sound of the machine before they enter the hospital. Now they form the rhythm of her album’s title track. « Beck writes with images. So I thought it was perfect for that album. It meant a lot. Just because of the subject of going into someone’s brain and talking about death and life. The title was a bit obvious. » 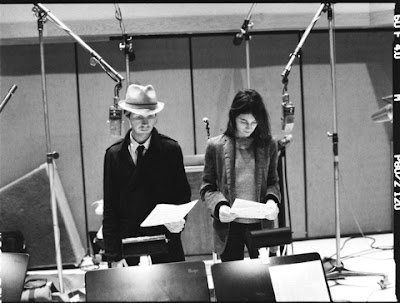 Besides that, Gainsbourg’s contributions to the record are less concrete. She says she and Beck met over several weeks-long sessions in L.A., where she would talk to him about sounds and ideas, and he’d play rhythm tracks and write lyrics based on her suggestions. « [Beck] was trying to make me write, and he was trying to make it sound as if it’s very, very easy. And for him it was, » she says. « But for me, I found it terribly difficult. I tried and tried, and I came up with words and stuff that I wanted to talk about, but mainly it was titles. It was very sweet of him to be so confident in me, but I wasn’t confident enough anyway. » Part of it is a language thing — Gainsbourg still uses French when she can’t quite find the right English word, and she also thinks and writes in French. Yet her first language is too loaded for her to use in her music. For Gainsbourg, singing in French reminds her too much of her father Serge Gainsbourg (her first collaborator). « I can’t escape from that. He’s such an auteur. It isn’t about the competition, but in my head I’m very much underneath that level of writing. Someday I hope I’ll forget that or deal with it in another way. »

But she had no such problems working with Beck, who made every recording session feel as comfortable as possible. Part of that was the family atmosphere — Beck brought his children to the studio, and Gainsbourg’s young son and daughter even made album appearances (her son plays drums on « Trick Pony »). And Beck’s anything-goes policy let her experiment with genres. « We tried very different things, and then gradually it was …homogène. [The songs are] all in different styles but one proper album. I was able to go and try a blues song, then go into more of a pop song. I even tried a rap that didn’t work out because I wasn’t very good, » she laughs. Another favorite was « Me And Jane Doe, » Gainsbourg says, « …because it doesn’t look like me. » Even Beck’s trademark cultural namedrops were fun. « He has a lot of references to American culture and American landscapes. It was so far away from me. But I enjoyed saying these words with my voice and my English accents which kept me as a foreigner inside this new culture. That was very exciting. »

You can download « IRM » here for the price of an e-mail address, or check the Diskjokke remix: