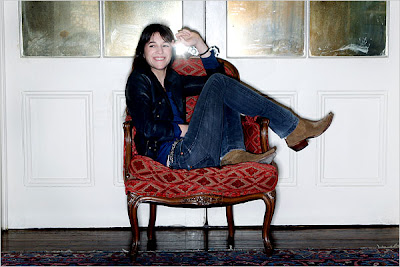 WHAT I’M WEARING NOW I told Nicolas Ghesquiere from Balenciaga that I needed his help for live shows, so he made me this jacket in three different colors. He made the belt, too. Because I dress in a very simple way, I like having one little thing that comes out a bit. I’ve been wearing these boots for four or five years. They’re from a place in London called R. Soles. They’re just easy. I love the color. The shirt is Schweisser. I found it at Opening Ceremony in Los Angeles. The jeans are Notify. I’ve been wearing these for four years. The patina — that’s what I love. So, I have many pairs, but I keep wearing the same ones until I have holes in them and then I start again. I use them in a brutal way.

STYLE CREDO I don’t like to think about what I’m wearing until I have to — for pictures or events. I like having a uniform: basics that I pick from. It’s funny to hear that I’m a style icon because there’s no effort.

ON MAKEUP In the ’60s and ’70s, my mother wore a lot of black eyes, and when I was growing up, she went back to nothing. She always told me that you have to be bare — nothing better than not having any makeup. I wish I had tried things like all young girls do. So now I’m trying things out. Basic things like mascara. I’ve tried a really strong lip, but it just doesn’t suit me. Everything that you notice is to me very harsh. I like to be as discreet as I can.

ON FRAGRANCE I don’t wear fragrance. I like the smell of skin and things that are not perfume, like talcum powder. But I love the idea that Nicolas thought about me when he made the new Balenciaga fragrance. It’s lovely. I keep it as an object and I smell it. I love it as if it was a costume.