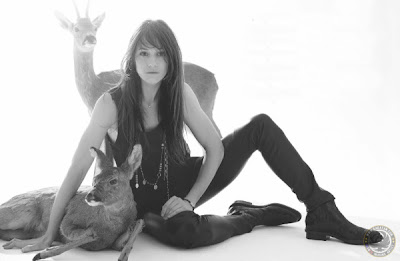 Charlotte Gainsbourg will be at the Crocodile tomorrow night. Hope you already have tickets…

​Charlotte Gainsbourg’s come a long way since she was 13 and recording the hair-raisingly creepy « Lemon Incest » with her father, the French folk icon Serge Gainsbourg. Tomorrow night, she’ll perform to a sold-out Crocodile as part of her first-ever headlining tour in support of her third record, IRM. I recently talked to Gainsbourg at length about the making of IRM – which was written and produced by Beck – her stage fright, and balancing a career in film and music. You can read the full article in tomorrow’s issue, but here’s a snippet, in the meantime, of Gainsbourg discussing her father’s influence on her music:

Charlotte Gainsbourg: « Of course his music has been with me all my life, and it’ll continue that way. It’s difficult for me to step aside, and I don’t really want to. While I was recording with Beck, we didn’t really need to talk about it that much. He knew how important it was to me. There are some influences in the album that I could hear, percussions that reminded me of songs like « Couleur Cafe » and « New York USA ». That was one period of his life when he was using percussions. So it was nice to feel that and to know it was there on the album somewhere, but not too definite and not too heavy. It’s always a difficult balance for me to talk about him, because I want to, and at the same time, it’s heavy for me to breathe with that. But I’ve learned to make my own mix.«